It’s a medical nightmare: When the bullets fly not outside on the street, but in the doctor’s office or the hospital itself.

This week’s shooting that left four people dead at a Tulsa medical center is an all-too-familiar scenario for health care workers across the nation, who face assaults and even bullets on the job, according to studies and police reports of at least a dozen shootings across the U.S.

In another hospital attack on Friday, a man stabbed a doctor and two nurses at Encino Hospital Medical Center’s emergency department in the San Fernando Valley of Los Angeles and barricaded himself inside. The man remained inside a room in the hospital for about four hours as SWAT team members tried to unsuccessfully to negotiate with him before he was finally arrested, police said.

“The risk of workplace violence is a serious occupational hazard for nurses and other health care workers,” a recent study by National Nurses United found. “Countless acts of assault, battery, aggression, and threats of violence that routinely take place in health care settings demonstrate a frightening trend of increasing violence faced by health care workers throughout the country.”

On the same day as the Tulsa shooting, a county jail inmate receiving treatment at a Miami Valley, Ohio, hospital stole a security guard’s gun, killed the guard and escaped before fatally shooting himself. And that’s just one of at least six deadly assaults in medical buildings that have happened in Texas, California, New Jersey, Minnesota and elsewhere in the past three years.

‘WE’RE IN A PARALYSIS’:There have already been a dozen mass shootings this year

Researchers have found that the risk of assaults is higher for health care workers than for people in other workplaces, and their risk to become gun violence victims is rising.

“The frequency with which physicians are injured or killed in acute care hospital shootings has more than tripled during the past two decades,” Maine Medical Center researchers wrote in study they published in April of this year.

Shooting attacks in health settings are usually purposeful and targeted, unlike other types of mass shootings where the attacker doesn’t personally know the victims, research shows. The gunman in Tulsa targeted an orthopedic surgeon who operated on his back, blaming him for persistent back pain, authorities said.

In some states like Utah, lawmakers currently are considering legislation that would enhance penalties for assaulting healthcare workers, Kaiser Health News reported.

Wisconsin already has a law that makes battery against certain healthcare workers a felony, though a bill moving through its legislature would extend that penalty to anyone threatening violence to a healthcare worker — similar to laws covering police officers and other government workers, according to Kaiser.

Holding a grudge against a physician for health outcomes is the motive in about 20% of fatal shootings involving health care workers, the Maine Medical Center researchers found in a study of four years’ of hospital shooting data published in 2019.

In one case, a gunman killed a medical assistant and injured four other people at a Buffalo, Minnesota health clinic in February 2021. Prosecutors say the suspect had substance abuse problems and was angry about treatment he got at the clinic.

A year earlier, a gunman who neighbors said suffered years of back pain after a surgery gunned down an orthopedic surgeon at a Rancho Mirage, California medical office before taking his own life.

Because attackers who target health care settings are so determined in their motives, it is difficult to stop them, according to a Johns Hopkins report.

“Most of the events involved a determined shooter with a specific target,” the study says.

Suicide, attempts at “euthanizing” a relative patient and mental instability were also motives for hospital gunmen.

One man who said he wanted to end his wife’s suffering shot her to death at a medical center in Valhalla, New York, before taking his own life in August 2018. Another man killed his mother in an intensive care unit in Lebanon, New Hampshire, in 2017.

Dr. Joseph Wax, who co-authored the Maine Medical Center studies on shootings in health care settings, said the reported details of this week’s Tulsa shooting align with what is typical of these types of shootings: A male perpetrator, a motive of a grudge related to a surgical result, an attack at the physician’s workplace and a self-inflicted gunshot leading to suicide.

FROM BACK SURGERY TO A MASS KILLING:How the tragic Tulsa hospital shooting unfolded

A look at other fatal medical shootings in the U.S.: 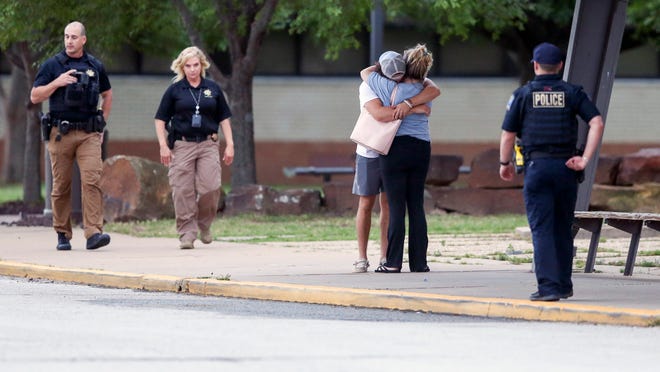