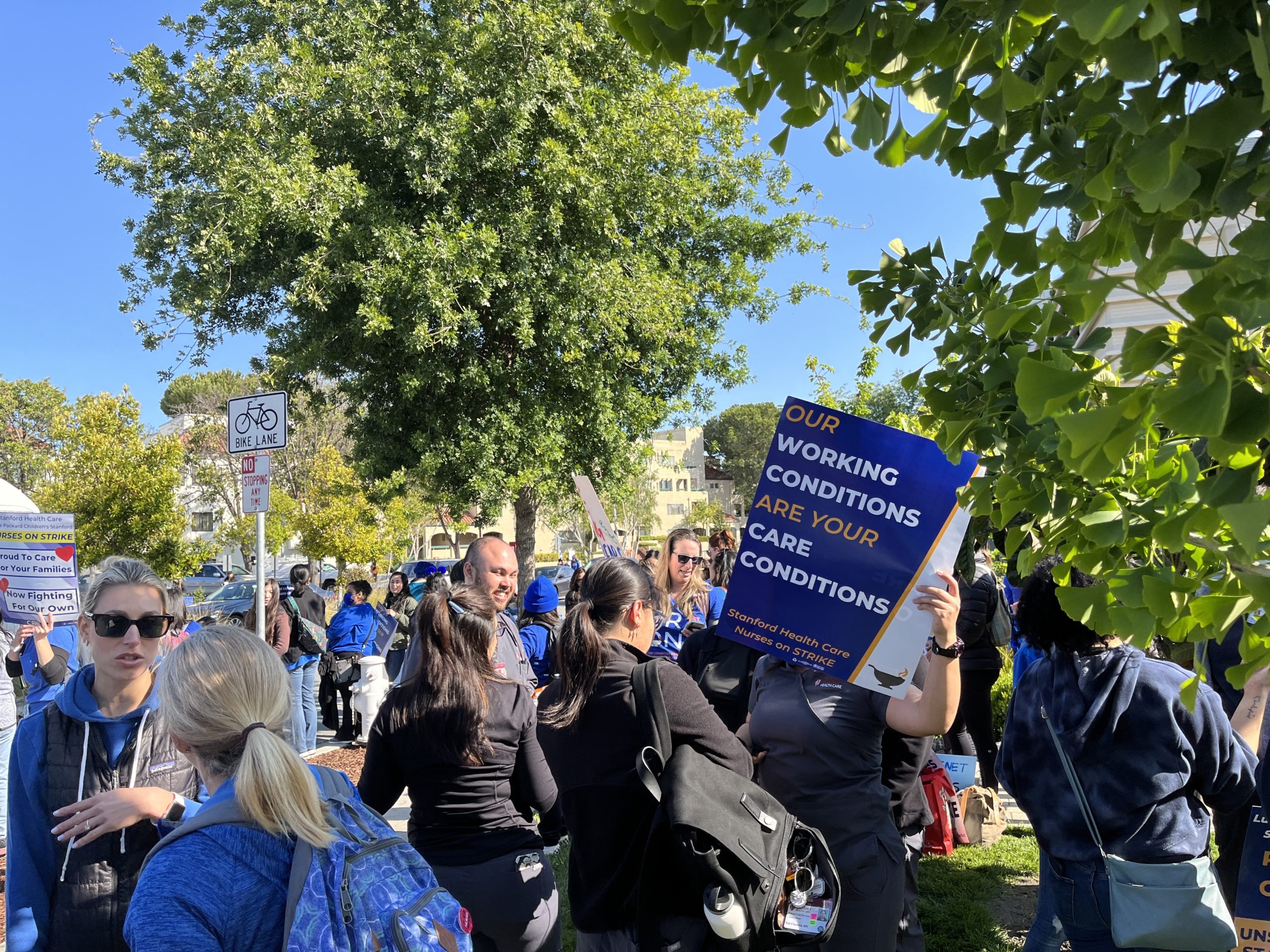 The strike comes after months of strained negotiations between the Stanford hospitals and the Committee for Recognition of Nursing Achievement (CRONA), who hold scheduled talks every three years. CRONA, which saw its previous nursing contracts expire on March 31, notified hospitals earlier this month of its intent to strike after 93% of eligible nurses voted to authorize a labor stoppage.

Hospital administrators will withdraw health care benefits from striking nurses beginning May 1, according to CRONA. The decision has garnered significant backlash from nurses and from Bay Area leaders, with California state assembly members Ash Kalra and Marc Berman and State Senator Josh Becker characterizing the move as a “strike-breaking tactic” and urging hospital administrators “to return to the bargaining table.”

The decision to withdraw benefits is “standard practice” that is not exclusive to either of the hospitals, wrote Chief Nurse Executive and Vice President of Patient Care Services for Stanford Health Care Dale Beatty and Chief Nursing Officer and Senior Vice President of Patient Care for Stanford Children’s Health Jesus Cepero in a joint statement to The Daily. Striking nurses “may pay to continue their health coverage through COBRA, a federal program that allows employees to temporarily extend their group health benefits,” Beatty and Cepero added.

The union organized a picket in front of Stanford University Medical Center on Monday, drawing cheering crowds of nurses and community members. One participant, retired licensed clinical social worker Deborah Kurland, said that she wholeheartedly supported the nurses’ efforts to strike given their patient care efforts.

“They are angels on Earth,” Kurland said. “They are unappreciated, putting themselves at risk and on the line especially during COVID.”

The hospitals were “deeply disappointed” that CRONA chose to strike given the “deep, long lasting, and costly” impacts of a labor stoppage, Beatty and Cepero wrote.

Beatty and Cepero also highlighted the hospitals’ previous efforts to “reach a mutually acceptable contract agreement,” writing that they “have made meaningful progress at the bargaining table so far.” The hospitals’ current package includes wage increases, higher first year retention bonuses, funding to help nurses repay loans, increased paid time off and “a new program for retention-incentive payments for [Stanford] nurses working in units with higher vacancy rates and hard-to-fill positions,” they wrote.

Still, ICU nurse Brittaney West said that striking was a necessary “last resort” for nurses. Nurses have consistently expressed frustration with what they view as  a disconnect between nurses and hospitals on key nursing demands.

“We have to show the hospitals that the nurses need to be taken care of,” West said.

CRONA called for “real solutions for staffing” and “competitive wages and benefits that address the growing cost of living and commuting in the Bay Area” as two key components of a fair contract in a letter delivered to the Board of Trustees at Stanford Health Care and Lucile Packard Children’s Hospital earlier today. The union also stressed the need to “address deep problems that are driving nurses out of the industry,” including “accessible mental health support” and “the ability to schedule time off to rest and recover,” according to the letter. CRONA urged trustees at both hospitals to support its efforts to obtain fair contracts for nurses.

“The hospitals should be ashamed of themselves,” Reed said. “They should have never gotten to this point.”

West highlighted the importance of the strike as a “turning point” for other nurses and hospitals.