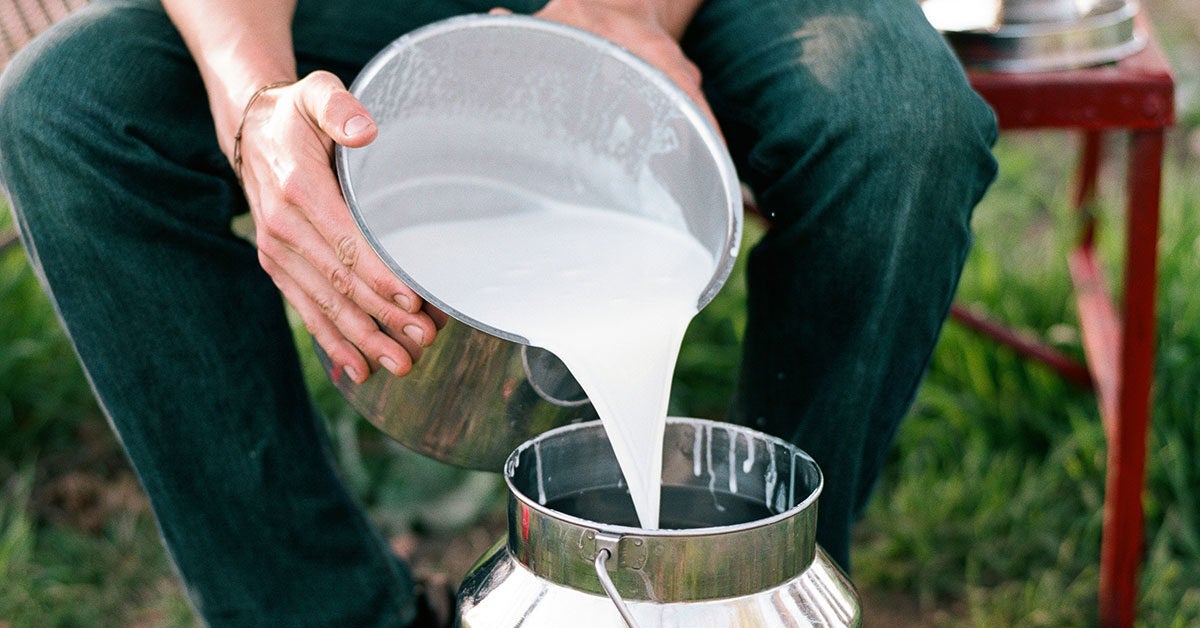 Goat milk that’s raw has not been heated to get rid of bacteria or altered in any way.

Proponents of raw goat milk suggest that it’s easier to digest and offers health benefits that processed milks do not. It has become a bit of a controversial topic in the health food world.

Given its purported benefits and confirmed risks, you may be wondering whether raw goat milk is healthy.

Raw goat milk does not go through pasteurization, the process of heating milk to destroy harmful bacteria ().

You can think of it as milk produced by goats that has not been processed or altered before getting to consumers. However, depending on how it’s produced, raw goat milk may be chilled, tested, filtered, or otherwise lightly processed.

There’s some debate about what level of processing is acceptable for a product to be considered “raw” milk.

Raw goat milk may be difficult to find. It also varies in price, depending on where you purchase it.

Because raw milks are not pasteurized to remove bacteria that can potentially make people sick, many U.S. states ban the sale of raw milk from goats and other animals. The availability of raw milk in other countries varies, depending on the laws ().

According to the Centers for Disease Control and Prevention, selling raw milk in retail settings is illegal in 20 states and legal in 13, while 15 states allow farms to sell raw milk directly to consumers ().

Some states, such as Minnesota, allow farms to sell raw milk but prohibit them from bottling it. Consumers who go to farms to purchase raw milk must bring their own containers (3).

Consider the world of raw goat milk a complicated and potentially illegal branch of health food culture. The dubious legal status and difficulty of purchasing raw milk make it a more serious commitment than merely going to your local supermarket.

Raw goat milk is not pasteurized to get rid of bacteria. Retail sale of raw milk from goats and other animals is banned in several U.S. states but remains legal in others.

Raw goat milk has many purported benefits, but little research exists to back them. If you’re intrigued by the idea of drinking raw goat milk, consider the facts in the debates.

Proponents of raw milk claim that it boasts more nutrients and is easier to digest than pasteurized milk. Some contend that pasteurization degrades nutrients and changes the composition of milk in ways that make it harder on your stomach ().

Raw milk is also believed to contain enzymes that help people process lactose — the sugar in milk that some people cannot digest — and “good bacteria” that contribute to a healthy gut ().

Finally, raw milk proponents suggest that drinking it reduces your chances of developing allergies and respiratory problems such as asthma. Some have even claimed that it boosts immunity ().

However, these claims have not held up to clinical tests. Any changes to milk composition caused by pasteurization are considered negligible and do not affect milk nutrition and related benefits (, ).

For example, research suggests that the vitamin and mineral content of milk remains stable and undergoes minimal change after pasteurization. Nutrients present in high levels in milk, such as riboflavin and calcium, do not degrade ().

Pasteurization also does not change the composition of milk fat and protein, nor does it affect your ability to digest them (, ).

However, most research on raw versus pasteurized milk has focused on cow milk, not goat milk. This may be an important distinction.

When it comes to raw goat milk, in particular, some health claims focus on its nutritional composition as compared with that of cow milk.

Goat milk has a slightly lower lactose content than cow milk. It also contains smaller fat molecules and a different protein composition. As a result, you may find it easier to digest than cow milk (, , ).

Research does back the claims that goat milk is easier to digest and less allergenic for some people. However, these benefits are not exclusive to raw goat milk ().

Pasteurization does not significantly change the structure or nutritional composition of goat milk. Thus, any related benefits cannot be proven to come only from raw goat milk ().

Goat milk is also a good source of nutrients. It provides protein, fat, and carbohydrates, as well as important minerals such as calcium and potassium. But again, the nutrient content of raw milk is not superior to that of pasteurized milk ().

The potential downsides and dangers outweigh the possible benefits of raw goat milk.

Because it is not pasteurized, raw goat milk may contain harmful bacteria such as Campylobacter, Listeria, E. coli, and Salmonella (, ).

Bacteria can get into milk through any of these mechanisms ():

Even raw milk from animals that appear healthy and live on farms with sanitary practices may be contaminated ().

Contaminated raw milk may lead to foodborne illness with symptoms such as vomiting, diarrhea, and stomach cramping, as well as larger complications.

While some people have mild symptoms after exposure, others may experience a serious illness that may require hospitalization and even lead to death ().

Certain populations are at an increased risk of serious illness and death if they consume raw milk that contains harmful bacteria. These include ():

Notably, fewer than 1% of reported foodborne illness outbreaks are caused by milk or dairy products. But 96% of those outbreaks are the result of raw milk or cheese consumption, according to a 2017 study conducted by the CDC (, ).

In other words, unpasteurized dairy has been linked to 840 times as many illnesses as pasteurized products ().

Raw goat milk and other unpasteurized dairy products are much more likely to cause foodborne illness than pasteurized options.

As discussed, the fat and protein in goat milk have different compositions than those in cow milk. As a result, you may find that goat milk is easier to digest if you have trouble with cow milk (, , ).

However, if you have an allergy to cow milk, you should not consider goat milk as an alternative. Most people with this allergy will also react to goat milk ().

Goat milk has more calories and fat, slightly more protein, and more calcium and potassium. Cow milk, on the other hand, packs more vitamin B12.

Keep in mind that these are the nutritional values for pasteurized goat and cow milk. Nutritional info for raw varieties is not available but should look similar.

Goat milk is similar to cow milk in macronutrient, vitamin, and mineral content. However, it may be easier to digest.

Some people claim that raw goat milk is healthier and more beneficial than pasteurized goat milk.

However, based on the available research, there’s no reason to believe that raw goat milk offers any health benefits that you cannot get from pasteurized goat milk.

On top of that, you may be taking a serious risk by drinking raw goat milk. Bacteria that cause foodborne illness are much more likely to be present in unpasteurized dairy and can be particularly dangerous for people with compromised immune systems.