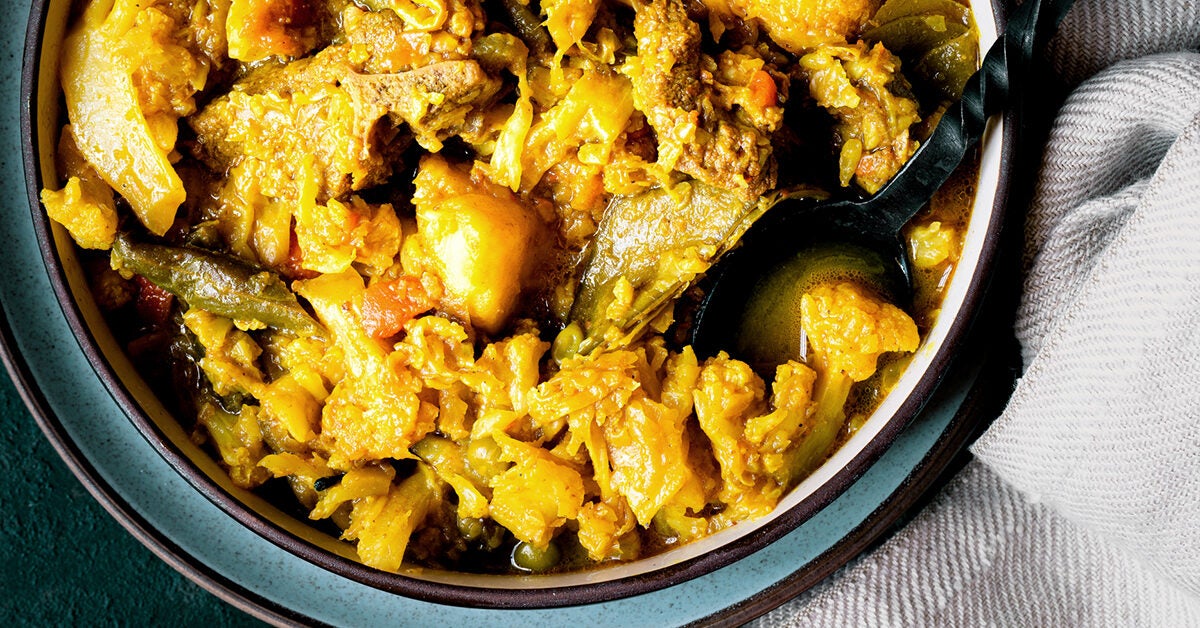 Meat often makes a regular appearance in the diet of humans. Whether you choose red or white meats, meat is rich in protein, vitamins, and minerals. Meat can be sourced from various animals, the most popular including cow, lamb, and chicken.

Recently, goat meat has started to gain some traction. While it’s often been consumed in Asian, Caribbean, and Middle Eastern cuisine, the demand is less common in western countries (1).

Considered to be one of the healthiest red meats, lower in saturated fat and cholesterol, and higher in iron than other red or white meats.

Goat meat has a strong, gamey flavor, sweeter than lamb but less sweet than beef. Cooking it with lots of flavor and spices helps complement its unique flavor.

Goat meat does not have cultural or religious taboos that some other meats may have, making it suitable for most cultures (2).

This article explores more about goat meat nutrition, health benefits and downsides, and ways to cook and enjoy goat meat as part of a balanced diet.

Goat meat is typically classified in terms of the age of the goat when the meat is processed. Kid meat or capretto refers to the meat of an animal aged 4 months or less, and adult meat or chevon comes from an animal up to 14 months old. ().

Kid goat meat is the leaner of the two and is quite tender. Its higher water content makes it suitable for several cooking methods. Adult goat meat is a little tougher and works best with slow, moist heat cooking methods to help bring out the flavor (1,).

There are numerous breeds of goat, each serving a different purpose. Some are better used to produce milk, while others are more suitable for meat consumption. Common breeds of goat meat include the Boer, the Spanish, and the Brush varieties (4).

Where is consumed? How is it prepared?

Goat meat is an acceptable source of animal protein within many cultures and religions (2).

Goat meat is commonly used in Asian, African, Caribbean, and Middle Eastern cuisine. It’s less common to cook with goat meat in western countries, such as America, Canada, and Australia (1).

It’s often prepared in stews and curries or slow-roasted. Goat meat is quite lean, so it’s best cooked over low heat, around 145–160 degrees Fahrenheit, to preserve tenderness and juiciness (5).

There are many breeds of goat that can be used for goat meat. While it’s not common in western cuisine, goat meat works well with flavors of Asian, African, Caribbean, and Middle Eastern cuisine, where it’s mostly consumed.

Goat meat is a great source of nutrients, including protein, iron, vitamin B12, zinc, and potassium. It’s also low in total fat and saturated fat compared with other forms of red meat.

Goat meat is also a great source of protein, which is essential for the growth and repair of tissues and muscles ().

Goat meat offers a variety of nutritional properties that can be part of a healthy diet.

Low in fat and saturated fat

While fat might not be a problem, eating too much can result in consuming more total energy than needed. Because goat meat is lean, it’s a great source of protein with fewer calories. This may benefit people looking to lose weight ().

Goat meat has about 1 gram of saturated fat per 3 ounces (85g), which is lower than some other meats. Lean beef is also low in saturated fat, with about 2 grams in an equal serving size, but some cuts of red meat have more (,).

Eating saturated fat is linked with an increase in “bad” cholesterol, or low-density lipoprotein (LDL), in the blood ().

High levels of LDL may lead to the build-up of fatty deposits in the blood vessels that can continue to grow and potentially break off, blocking the flow of blood and causing a heart attack or stroke ().

When it comes to iron, choosing goat meat means getting more for less. Goat meat contains approximately 3.2 mg of iron per 3 ounces (85 grams). This is almost double the amount of iron found in lean beef (1.8 mg), and chicken breast (0.42 mg) (, , ).

Iron is an important mineral consumed in the food we eat. Without enough iron, the body cannot make hemoglobin, a protein found in red blood cells that carries oxygen around the body ().

Additionally, iron is essential for many processes, such as ():

Goat meat is a great source of vitamin B12. Vitamin B12 (also known as cobalamin) is an essential nutrient that plays many roles in the body, including ():

Potassium is a nutrient and electrolyte that helps regulate blood pressure and maintain cell functions, particularly the nerve and muscle cells ().

Goat meat is highly nutritious and a great source of animal protein that’s lower in calories and saturated fat. Goat meat may help with weight loss goals, and it supplies iron and vitamin B12.

While the nutritional composition of goat meat appears to be superior to some other red meat varieties, eating too much red meat has been suspected to increase cancer risk. However, this is based mostly on observational studies in humans ().

Research only shows a correlation and not causation between red meat and cancer. The increase in risk may be linked to having unhealthy habits in addition to consuming too much red meat, rather than solely due to a high intake of red meat ().

When red meat is charred or cooked “well-done” at very high temperatures, this may result in the formation of heterocyclic amines (HCAs) and polycyclic amines (PAHs). HCAs and PAHs are chemicals suspected of increasing cancer risk in humans ().

However, the formation of HAAs and PAHs may be related to the cooking process rather than the type of meat being cooked. Luckily, goat meat is often cooked slowly and at lower temperatures ().

Goat meat has a strong gamey flavor. Some people consider this a downside. Also, because it’s quite a lean meat, if it’s not cooked well it can be quite tough and undesirable to eat.

Cooking it at low temperatures for longer time periods helps bring out the flavor and tenderness of goat meat.

The cooking method of goat meat can increase the risk of developing cancer in humans. Cooking goat meat at slow and low temperatures is potentially safer, and it results in a delicious end product.

Goat meat can be prepared in different ways. The most common method is slow cooking in stews and curries. However, it does not need to be completely ruled out for other cooking methods.

For a healthier choice, goat meat can be used as a protein source in most recipes. Grilling, roasting, stewing, and pan-frying are only some of the cooking methods that can be used to prepare goat meat.

The various cuts of goat meat can be broken down into two cooking techniques: cook quick or cook slow.

Rib chops, loin chops, and tenderloin are more suitable to cook fast. The remaining cuts work well if cooked slowly, because it helps to break down the tough connective tissues, making the meat more tender and flavorful.

If you’re ready to give goat meat a go but don’t know what to make, draw your inspiration from cuisines around the world. Here are some recipes to get you started:

Virtually all parts of the goat can be used in your home cooking. Most cuts work best if they’re cooked slowly, such as roasting and stewing. A quick internet search can bring up a range of recipes to try.

Overall, goat meat offers a variety of nutrients that can benefit your health. It’s nutritionally superior in some ways to other varieties of red meats and can be included as part of a balanced diet.

For variety, substitute your usual red meat with goat meat in different recipes and cultural cuisines.

Finally, to bring out the best from goat meat, it’s best cooked slow and steady.

How Much CoQ10 Should You Take? Dosage + Benefits

How Much CoQ10 Should You Take? Dosage + Benefits