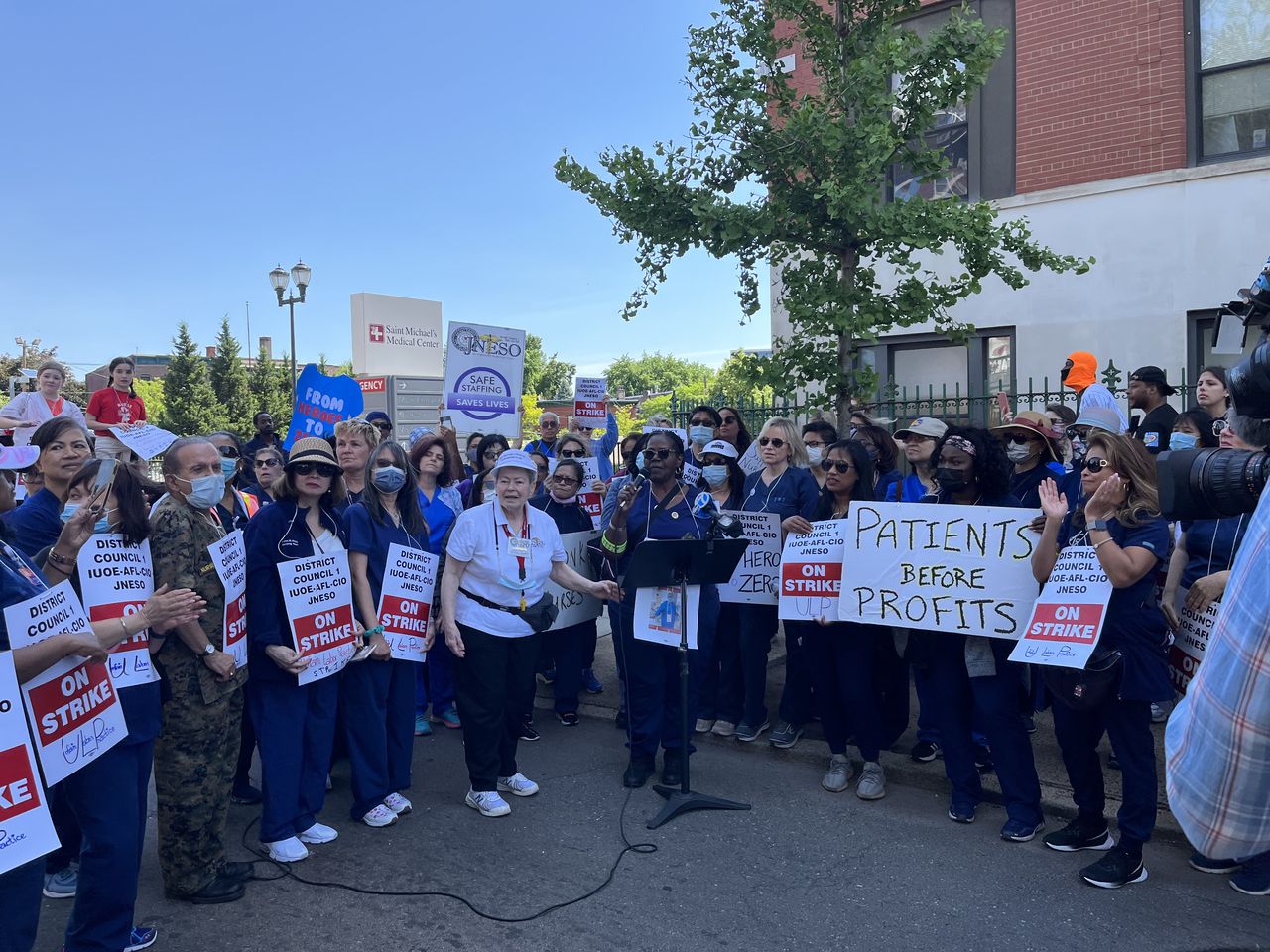 More than 300 nurses, radiology technicians and other workers at Saint Michael’s Medical Center in Newark went on strike Monday over what they say are low wages and restrictive healthcare benefits that, in turn, have contributed to an ongoing staffing shortage at the private hospital.

The hospital remains open and a negotiating session is scheduled for Tuesday, the ninth since contract talks began on March 28, with both sides vowing to continue bargaining in good faith.

But there is a significant gap between the 2% annual raises being offered by the hospital’s owner, California-based Prime Healthcare, over a three-year period of the proposed new contract, and the 6% hike demanded by the union, the Jersey Nurses Economic Security Organization, or JNESO.

In addition, Prime wants to eliminate annual “step” pay increments, or seniority-based raises apart from the increases negotiated with each new contract, which the union strongly opposes, said Virginia Treacy, a senior union negotiator for the NJESO, and a nurse for more than 40 years.

At the same time, the union is seeking better health coverage than what Treacy referred to as the comapny’s “deplorable” self-insurance plan, which she said has a $11,000 deductible and a $10,000 out-of-pocket ceiling and with no out-of-network coverage even at reduced coverage rates.

She said the union also wants more masks, paper robes and other personal protective devices, or PPDs, for nurses and other workers in quantities consistent with guidance from the U.S. Centers for Disease Control (CDC), not the limited amounts rationed by the company.

The strikers include 300 nurses and 60 to 70 respiratory therapists and radiology, CT scan and MRI technicians who also belong to the union.

Along with the stingy health coverage, Treacy said the average nurse’s pay of $44 per hour was not competitive in the current labor market, and Prime’s inability to attract qualified applicants had contributed to a staffing shortage of 42 registered nurses and 17 technicians, jeopardizing quality of care and overburdening staffers who have to take up the slack.

At the same time, Treacy said the hospital was losing patients because it was unable to negotiate rates with some of the state’s biggest insurers, including Aetna and United Healthcare.

“Were not the only people they’re having trouble negotiating contracts with,” Treacy said.

A spokesperson for Saint Michael’s, Bruno Tedeschi, said the company would not discuss specifics of its negotiations with the union. But Tedeschi issued a statement on Monday insisting the company was negotiating in good faith and was confidant that a new deal would be struck, “that is amenable to both sides and in the best interests of our patients and all those we serve.”

“Meantime, we remain open and fully operational,” Tedeschi said. “Saint Michael’s has arranged for qualified staff to ensure the hospital can continue providing high-quality, safe health care for our patients.” St. Michael’s was founded in 1857 by the Franciscan Sisters of the Poor, but fell on hard times itself and was in bankruptcy when Prime acquired it in 2016.

Current negotiations are for what would be the third three-year contract between prime and the union, after the first two deals went smoothly, said Treacy. The most recent deal expired on May 4, and the union formally warned the hospital of the chance of a strike on May 10 under federal rules requiring advance notice of a strike by union healthcare workers.

“We’re glad they’re here and we’re glad they bought us,” said Treacy, adding that this is the union’s first strike at Saint Michael’s since 1984 under any owner. “But they’re not going to finance this on the patients’ backs.”

Nobody knows Jersey better than N.J.com. Sign up to get breaking news alerts straight to your inbox.

Steve Strunsky may be reached at [email protected]