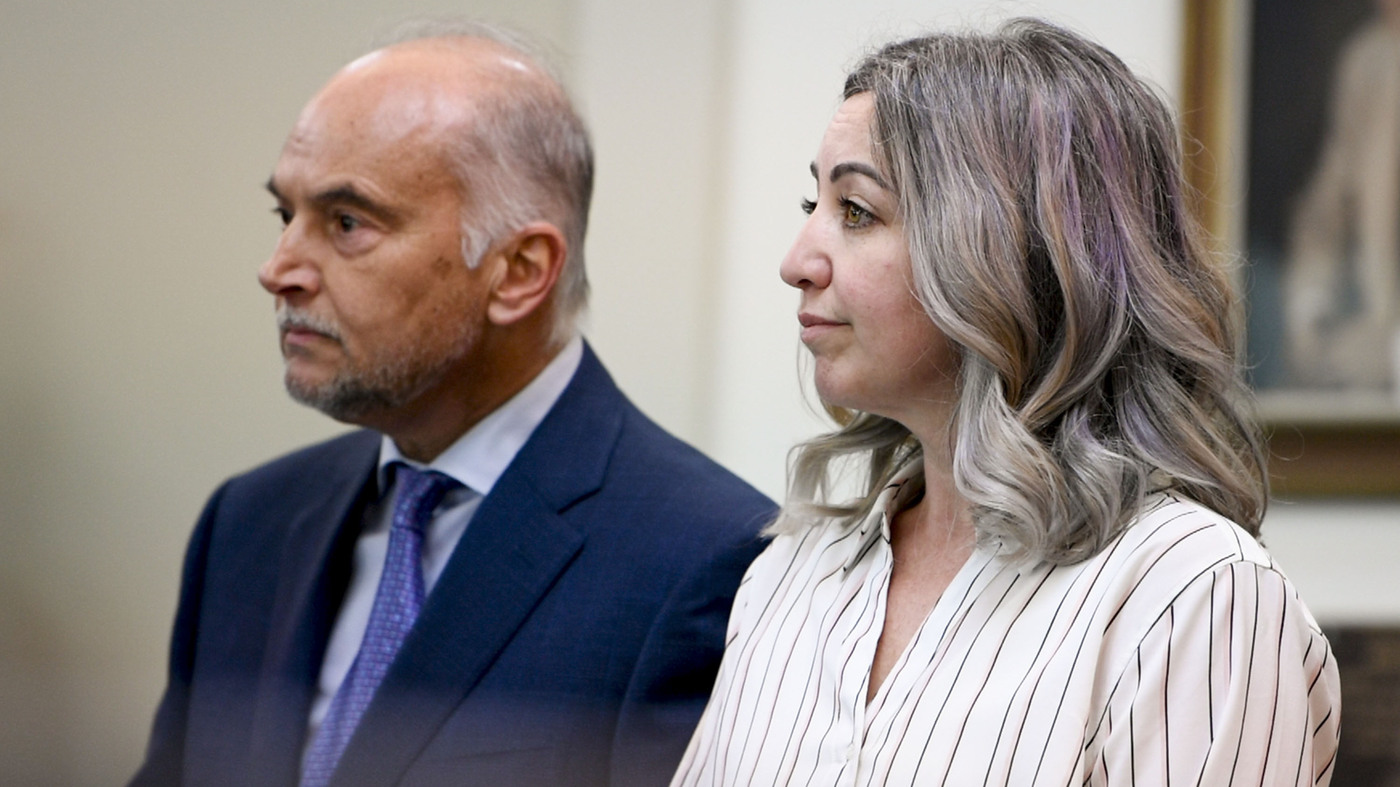 RaDonda Vaught and her attorney, Peter Strianse, listen as verdicts are read at her trial in Nashville, Tenn., on Friday, March 25. The jury found Vaught, a former nurse, guilty of criminally negligent homicide and gross neglect of an impaired adult in the death of a patient to whom she accidentally gave the wrong medication.

RaDonda Vaught and her attorney, Peter Strianse, listen as verdicts are read at her trial in Nashville, Tenn., on Friday, March 25. The jury found Vaught, a former nurse, guilty of criminally negligent homicide and gross neglect of an impaired adult in the death of a patient to whom she accidentally gave the wrong medication.

RaDonda Vaught, a former nurse criminally prosecuted for a fatal drug error in 2017, was convicted of gross neglect of an impaired adult and negligent homicide on Friday after a three-day trial in Nashville, Tenn., that gripped nurses across the country.

Vaught faces three to six years in prison for neglect and one to two years for negligent homicide as a defendant with no prior convictions, according to sentencing guidelines provided by the Nashville district attorney’s office. Vaught is scheduled to be sentenced May 13, and her sentences are likely to run concurrently, said the district attorney’s spokesperson, Steve Hayslip.

Vaught’s trial has been closely watched by nurses and medical professionals across the U.S., many of whom worry it could set a precedent of criminalizing medical mistakes. Medical errors are generally handled by professional licensing boards or civil courts, and criminal prosecutions like Vaught’s case are exceedingly rare.

Janie Harvey Garner, the founder of Show Me Your Stethoscope, a nursing group on Facebook with more than 600,000 members, worries the conviction will have a chilling effect on nurses disclosing their own errors or near errors, which could have a detrimental effect on the quality of patient care.

“Health care just changed forever,” she said after the verdict. “You can no longer trust people to tell the truth because they will be incriminating themselves.”

In the wake of the verdict, the American Nurses Association issued a statement expressing similar concerns about Vaught’s conviction, saying it sets a “dangerous precedent” of “criminalizing the honest reporting of mistakes.” Some medical errors are “inevitable,” the statement said, and there are more “effective and just mechanisms” to address them than criminal prosecution.

“The nursing profession is already extremely short-staffed, strained and facing immense pressure — an unfortunate multi-year trend that was further exacerbated by the effects of the pandemic,” the statement said. “This ruling will have a long-lasting negative impact on the profession.”

Vaught, 38, of Bethpage, Tenn., was arrested in 2019 and charged with reckless homicide and gross neglect of an impaired adult in connection with the killing of Charlene Murphey, who died at Vanderbilt University Medical Center in late December 2017. The neglect charge stemmed from allegations that Vaught did not properly monitor Murphey after she was injected with the wrong drug.

Murphey, 75, of Gallatin, Tenn., was admitted to Vanderbilt for a brain injury. At the time of the error, her condition was improving, and she was being prepared for discharge from the hospital, according to courtroom testimony and a federal investigation report. Murphey was prescribed a sedative, Versed, to calm her before being scanned in a large MRI-like machine.

Vaught was tasked to retrieve Versed from a computerized medication cabinet but instead grabbed a powerful paralyzer, vecuronium. According to an investigation report filed in her court case, the nurse overlooked several warning signs as she withdrew the wrong drug — including that Versed is a liquid but vecuronium is a powder — and then injected Murphey and left her to be scanned. By the time the error was discovered, Murphey was brain-dead.

During the trial, prosecutors painted Vaught as an irresponsible and uncaring nurse who ignored her training and abandoned her patient. Assistant District Attorney Chad Jackson likened Vaught to a drunk driver who killed a bystander but said the nurse was “worse” because it was as if she were “driving with [her] eyes closed.”

“The immutable fact of this case is that Charlene Murphey is dead because RaDonda Vaught could not bother to pay attention to what she was doing,” Jackson said.

Vaught’s attorney, Peter Strianse, argued that his client made an honest mistake that did not constitute a crime and became a “scapegoat” for systemic problems related to medication cabinets at Vanderbilt University Medical Center in 2017.

But Vanderbilt officials countered on the stand. Terry Bosen, Vanderbilt’s pharmacy medication safety officer, testified that the hospital had some technical problems with medication cabinets in 2017 but that they were resolved weeks before Vaught pulled the wrong drug for Murphey.

In his closing argument, Strianse targeted the reckless homicide charge, arguing that his client could not have “recklessly” disregarded warning signs if she earnestly believed she had the right drug and saying there was “considerable debate” over whether vecuronium actually killed Murphey.

During the trial, Eli Zimmerman, a Vanderbilt neurologist, testified it was “in the realm of possibility” that Murphey’s death was caused entirely by her brain injury. Additionally, Davidson County Chief Medical Examiner Feng Li testified that although he determined Murphey died from vecuronium, he couldn’t verify how much of the drug she actually received. Li said a small dose may not have been lethal.

“I don’t mean to be facetious,” Strianse said of the medical examiner’s testimony, “but it sort of sounded like some amateur CSI episode — only without the science.”

Vaught did not testify. On the second day of the trial, prosecutors played an audio recording of Vaught’s interview with law enforcement officials in which she admitted to the drug error and said she “probably just killed a patient.”

During a separate proceeding before the Tennessee Board of Nursing last year, Vaught testified that she allowed herself to become “complacent” and “distracted” while using the medication cabinet and did not double-check which drug she had withdrawn despite multiple opportunities.

“I know the reason this patient is no longer here is because of me,” Vaught told the nursing board, starting to cry. “There won’t ever be a day that goes by that I don’t think about what I did.”