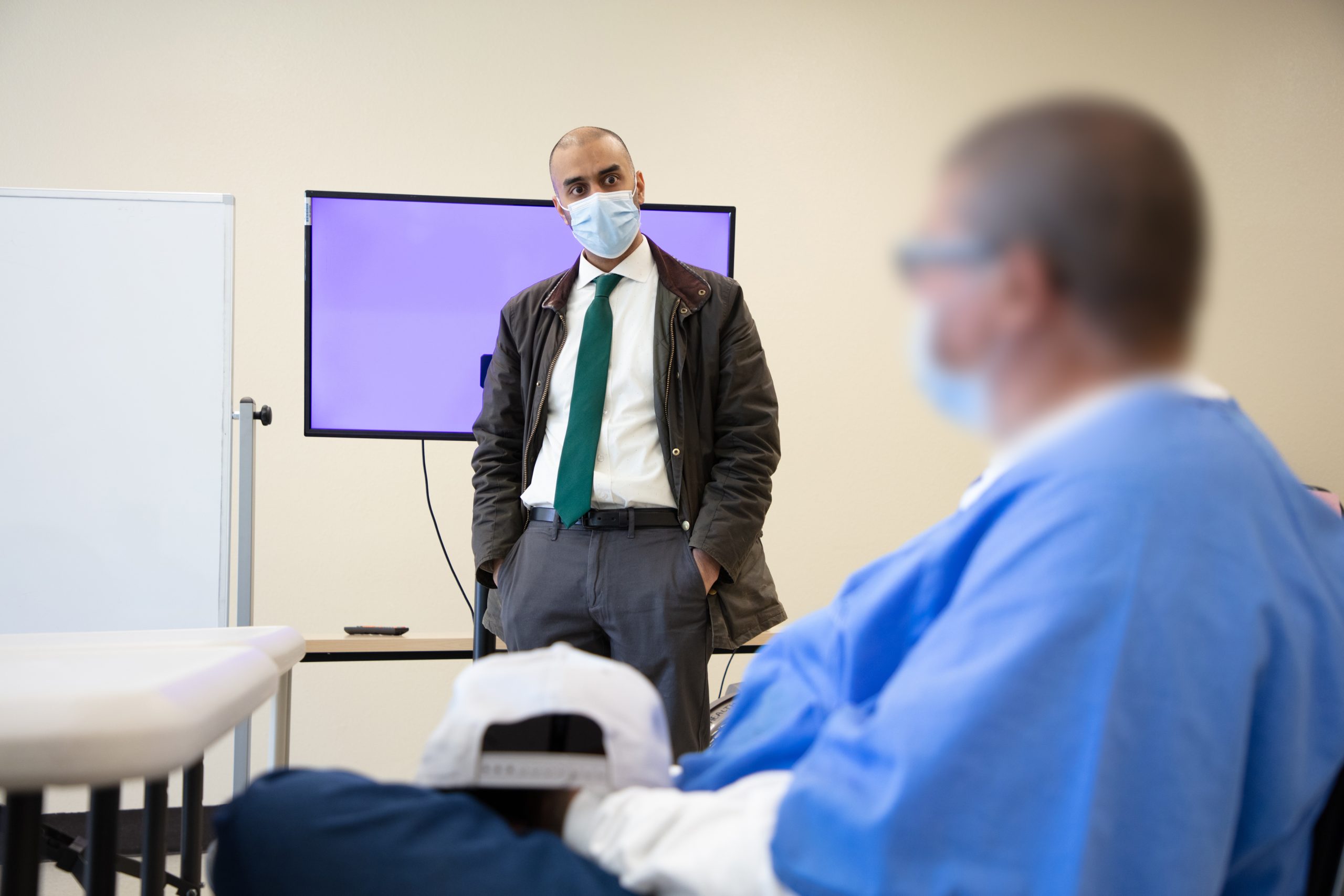 Each May, communities observe Mental Health Awareness Month, which emphasizes the importance of treatment and the impact trauma can have on the physical, emotional, and mental well-being of children, families, and communities. But for the dedicated employees of the CDCR’s Statewide Mental Health Program (SMHP), mental health is top-of-mind 24 hours a day, seven days a week.

CDCR has about 97,000 people incarcerated in 33 institutions, and of that population, about 30,000 receive some level of mental health care. A team of about 6,000 clinicians and support staff work around the clock ensuring incarcerated patients receive mental health care. At the helm of the SMHP is Deputy Director Dr. Amar Mehta. He will be the first to say he is not the secret to success – it’s the clinicians and support staff at the institutions.6

“We are not the center – they are the center,” Mehta said. “We are here to assist them (and) are partners in this. The only reason I have my job is to support the institutions in providing the best care.”

While local providers are key, leadership is also needed at the headquarters level given the complexity and diversity of mental health within CDCR. Mental health treatment is divided into four levels of care at CDCR, which by design has a population with mental health needs ranging from minimal care needed to the highest levels of emergency care.

The majority of those 30,000 patients fall into what is commonly referred to by the acronym “Triple-CMS,” or the Correctional Clinical Case Management System. This is comparable to outpatient care in the community, where patients see their doctor every few months. Otherwise, patients go about their daily lives just as anybody who sees their mental health provider at a clinic or home office.

The next level, the Enhanced Outpatient Program (EOP), can be likened to a day treatment program in the community. These individuals live together in the same housing units at their institutions, where they have a packed schedule of work, program, and recreation together.

The Psychiatric Inpatient Program (PIP) is the next level of care, which provides inpatient programs designed to provide more intensive treatment for patients who cannot function adequately or stabilize in a lower level of care. There are five main “PIPs” in the state, with some flexibility at other institutions.

Patients needing emergency mental health care are assigned to Mental Health Crisis Beds (MHCB), which is a short-term inpatient program, or they may be assigned to the Department of State Hospitals for longer-term care.

Every person who arrives at a CDCR Reception Center is screened for mental health needs, and referred to clinicians and programs accordingly. Mental health is a consideration in where individuals are housed at CDCR, as different locations provide different levels of care.

The path to San Quentin – and Sacramento

Mehta holds a bachelor’s degree in biological neuropsychology from the University of California San Diego, and then attended New York Medical College. He interned at Montefiore Medical Center in New York, followed by a residency in adult psychology and fellowship in child and adolescent psychiatry.

His experience in corrections started early in his career, when he began working with children in the Bronx. Most of those children were involved in the legal system, and Mehta wanted to learn as much as he could about how to help them. He completed another fellowship, this time in forensic psychiatry, working with the criminal justice system.

While in New York, Mehta worked at Sing Sing prison and Rikers Island jail, where he did some of the first evaluations of incarcerated transgender adolescents. Mehta eventually moved to the Golden State and found work in a setting familiar to him – a notorious, historic prison. Mehta began working in the telepsychiatry program out of San Quentin in 2013, which has grown into the largest program of its kind in the country.

At the time, Mehta had no intention of becoming the statewide program director. He became Board certified in addiction medicine. But after years seeing patients, he became Chief over the Telespychiatry program as it expanded. When the perfect storm of a global pandemic combined with retirements and career changes hit, Mehta was tapped to take over the mental health response to COVID-19.

As CDCR and the rest of the world faced the many unknowns of the pandemic, Mehta and leaders in other divisions throughout CDCR began putting plans in place to prevent and manage COVID-19. Because the telepsychiatry program had grown so much, other clinicians were able to quickly pivot to seeing patients via video in order to keep patients and providers safe.

In addition to continuing to provide care, mental health clinicians also banded together to assist the population in other ways with the huge challenges and stressors they faced. Throughout the state, patients, providers, and even those who did not have mental health needs banded together just as communities did outside of prison. Music was heard on tiers, physically distanced talent showcases were held, and the mental health teams throughout CDCR provided a steady source of support.

“There was of course a lot of anxiety about infection,” Mehta said, “but people banded together to support each other.”

That included getting patient education, staff supporting one another and, very importantly, getting vaccinated when it was possible to do so. Mental health is proud that their providers have some of the highest rates of vaccination in CDCR, which they pointed out as another example of the community looking out for each other.

With the support of Director of Health Care Services Dr. Joseph Bick, Mehta continues to empower providers to take ownership of their patients’ care, as they are the ones who most deeply understand their specific needs.

Most days Mehta can be found at San Quentin State Prison, which is where he started his career at CDCR. That’s also where Acting Assistant Deputy Director of Psychiatric Services, Dr. Erick Rizzotto, had been working, before taking a stint at Headquarters.

Rizzotto knows all about the influence certain Security Threat Groups (STGs), also known as “prison gangs,” have on their membership. Seeking mental health treatment is often seen as a form of weakness, and members are discouraged or prevented from doing so. The mental health department works to combat these influences, making patients more likely to seek – and continue to receive – the care they need.

When asked what they’d most want people not familiar with corrections to understand about mental health care in prisons, both Mehta and Rizzotto agreed that people should understand that mental health care is critical to a person’s success both during and after prison – and that helping incarcerated people develop the tools to properly cope with challenges will result in a safer world for everybody.

“Some of the largest concentrations of mental health patients in this country are correctional facilities,” Mehta said. “Ninety-five percent of people in prison will go back to the community at some point. Whatever happens to them here they will take with them. Being able to help them while they’re here – and to help them not come back ever, which is our main goal – is hugely beneficial to the community at large.”