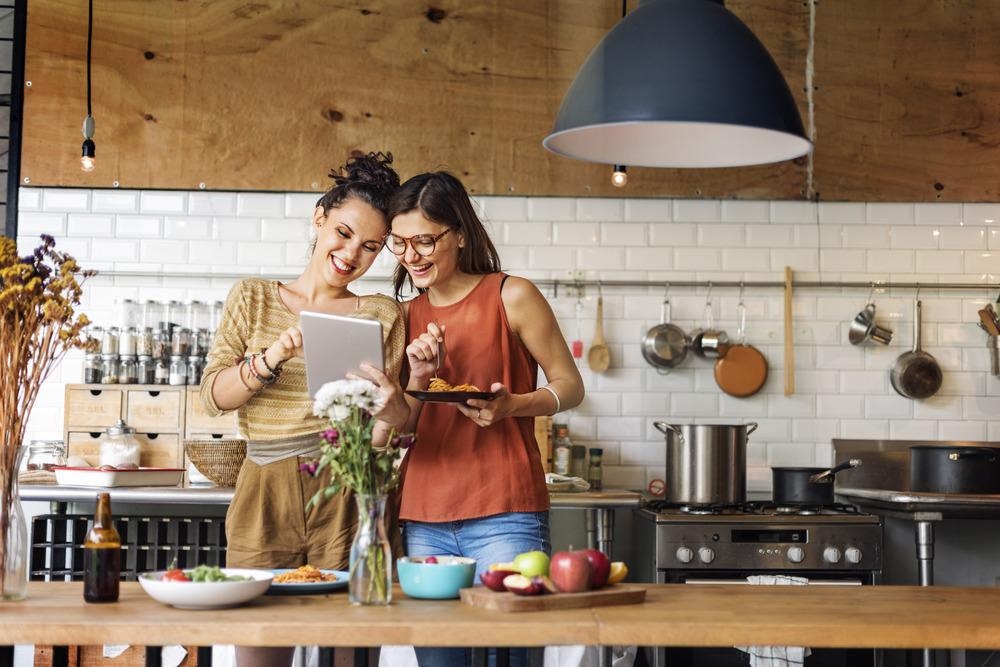 The nutritional benefits of food are well known. The associations between our physical and mental health are firmly established, though perhaps much lesser appreciated are the longer-term impacts of food on mood.

As well as the content of our diet though, the conventions in how we prepare it are now in focus for the potential benefits this might have for our mental health. There are benefits to good culinary skills that extend beyond the nutritional. Researchers believe culinary participation can work to positively improve our mental health.

In this article, we first look at the social rewards of cooking, discovered to have been present in early human life. These social advantages have continued, though their significance has perhaps been underappreciated.  Here we look at the positives of cooking in contemporary life and finally we turn to the relationship between food and mood.

Cooking is thought, by some experts, to have been a relatively recent invention in human evolutionary history, with researchers pitching the innovation to have occurred around 500,000 years ago. It may have occurred far earlier than this, though archaeological evidence is increasingly difficult to discern the farther back in time we go. Anthropologist Richard Wrangham purports that cooking arose before 1.8 million years ago.

Whenever it originated, many anthropologists nevertheless think that cooking encouraged social relationships and communitarian thinking in early humans. In fact, a decisive point in human history is thought to have been the shift to cooking and hot food, both of which may be linked to an increase in the size of the human brain. But as discussed here, there is debate about when this seismic shift occurred.

Nowadays people are cooking less frequently due to busy lifestyles and a lack of energy. This has spurred campaigns such as that of Jamie Oliver’s Ministry of Food. Oliver is a British celebrity chef who launched a campaign in 2008 to get people to cook again.

The therapeutic benefits of cooking

Cooking interventions have been implemented in therapeutic and rehabilitative settings. In occupational and rehabilitation therapy there has been research on cooking as a tool for cognitive and physical evaluation and development (Farmer et al., 2018).

Cooking skills are for most an essential daily task and utilize cognitive executive function and motor skills. These physical and mental skills have been assessed in relation to cooking abilities in the following clinical groups:

Further work has been done with the elderly and in patients with problems of substance abuse.

While research into this area is still in its infancy, early findings of psychosocial benefits have been most encouraging. The data available has been limited, but cooking programs are a common tool in occupational therapy or rehabilitation settings where results often go unreported. According to Farmer et al. (2018),

“As more detailed frameworks are developed examining the benefits of cooking interventions, it will be possible to explore the interconnectedness of psychosocial factors such as socialization, self-efficacy and/or mood, as well how those concepts interact with nutritional changes to lead to improved mental and physical health outcomes.”

Nutritional quality has been correlated with mood; whereby poor nutrition can invariably lead to low mood. Depression and anxiety are prevalent globally and are a leading cause of disability. Research into the relationship between food and mood has taken off in recent years. There has been much interest in the Mediterranean diet. This popular diet comprises:

Followers of this diet are not averse to the odd glass of red wine which boasts the presence of health-promoting flavonoids. The Mediterranean diet is widely thought to be associated with a reduced risk for depression and is believed to lower inflammation in the body.

More recently researchers have looked at the relationship between gut microbiome (––a term that refers to the combination of microorganisms, including bacteria and viruses inhabiting the human gut) and mental well-being. Dietary patterns may have positive or negative outcomes and the effects between gut and brain are bidirectional.

In contrast to the positive benefits of foods, it is well-known that many turn to ‘comfort eating’ in times of stress and to alleviate emotional discomfort. Such emotional eating tends to exacerbate problems of low mood. The high consumption of highly refined carbohydrates, for instance, can lead to the risk of obesity and diabetes.

The communitarian benefits of cooking have been intuitively long known. Many advocate a return to these age-old habits.