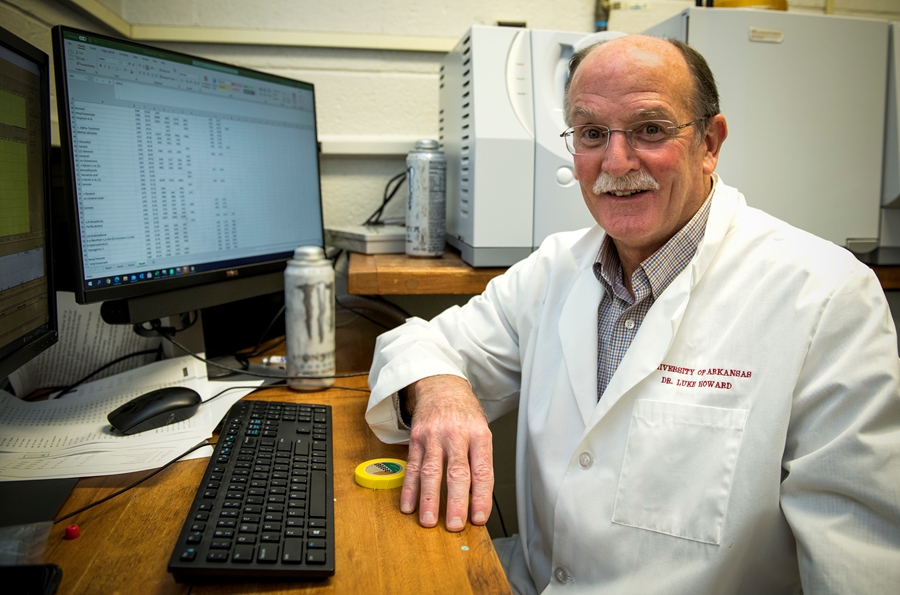 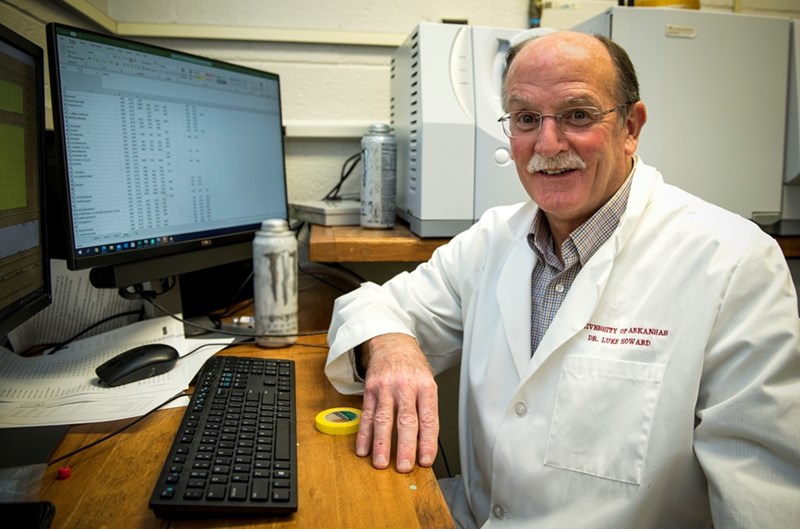 Luke Howard, professor of food science, has been pioneering research in functional foods at the Arkansas Agricultural Experiment Station. He retired last month after 24 years of research and teaching in the U of A System.

Luke Howard devoted his career to teasing out the hidden health-inducing properties of foods. He investigated the isolation and use of naturally occurring phytochemicals that can turn ordinary foods into health-boosting “functional foods.”

Howard retired Feb. 28 after serving 24 years as a professor of food science for the Arkansas Agricultural Experiment Station, the research arm of the U of A System Division of Agriculture, and the U of A’s Dale Bumpers College of Agricultural, Food and Life Sciences. His research focused on identifying and quantifying bioactive compounds in plant-based foods and finding ways to use them to improve human nutrition.

The Department of Food Science will host a retirement reception at 3:30 p.m., Friday, March 18, in the Food Science Building on the Milo J. Shult Agricultural Research and Extension Center off of Garland Avenue.

The reception will be a hybrid event held in person and also via Zoom.

“Dr. Howard is a gifted teacher and connects well with the students, infusing passion for food science,” said Jeyam Subbiah, professor and head of the Department of Food Science. “Being an alumnus, he has been loyal and dedicated to our department, the Division of Agriculture and the University of Arkansas.”

“Since I joined the University of Arkansas System almost three years ago, I have often relied on Dr. Howard’s insights. I can count on him in giving an unbiased opinion for the benefit of the whole department. I appreciate his smile and positive attitude. He has been an outstanding citizen of our department and an excellent mentor to our junior faculty.”

Subbiah said Howard joined the Arkansas Agricultural Experiment Station in 1997 as a research associate professor and was promoted to professor in 2002. He taught two undergraduate courses and one graduate level course for Bumpers College.

His research contributions for the Agricultural Experiment Station include two patents, more than 37 grants totaling more than $7 million, 89 percent of which he was the primary investigator. Subbiah said he co-edited one book and produced seven book chapters, 149 refereed scientific articles that have more than 14,200 citations, and 174 scientific presentations, including 74 that were invited.

Howard was elected a Fellow of the Agricultural and Food Chemistry Division of the American Chemical Society, the highest honor presented in his profession, Subbiah said.

“Dr. Howard is a respected colleague and a beloved teacher held in the highest esteem and regard by his peers and students,” Subbiah said. “He has made significant contributions in the area of bioactive properties of berry phytochemicals.”

For the last 20 years, Howard investigated primarily the bioactive phytochemicals that give berries their nutritional value and explored ways to extract more health benefits from them.

Key to Howard’s studies in berries were the compounds known as anthocyanin pigments that are responsible for their brilliant red, blue and black colors.

Bioactive compounds are most concentrated in fresh fruits, Howard said. To get an idea of the health benefits available of fruit purchased in stores, he has worked to determine the effects of postharvest handling and storage, processing and packaging on the levels of bioactive compounds in foods. He developed new technologies to prevent losses of the health-inducing compounds on their way to market.

“We’ve found ways to stabilize the bioactive compounds and fix their optimum potency during processing, storage and marketing,” Howard said.

He also advanced methods to isolate and purify bioactive compounds from processing byproducts, the pulpy residue, called pomace or press cake, that remains after the juice has been pressed out.

“Most of the fiber and up to half of the bioactive compounds, like anthocyanins, are in the pomace that was once considered waste material after making fruit juices,” Howard said. “They have potent antioxidant and anti-inflammatory properties.”

Inflammation is involved in virtually all human diseases, Howard said.

“Even exercise induces an inflammatory state,” Howard said. “If you can suppress inflammation with functional food compounds, you can mitigate many diseases or ease their symptoms.”

In earlier research, Howard collaborated with Ron Prior, a medical researcher at Arkansas Children’s Nutrition Center in Little Rock, to confirm the obesity fighting properties of berry phytochemicals in animal studies.

More recently, Howard collaborated with Sun-Ok Lee, associate professor of nutrition for the Arkansas Agricultural Experiment Station, in an Arkansas Biosciences Institute project to investigate the anti-inflammatory properties of berry volatile compounds responsible for their aroma in cell culture studies, he said.

“These are less concentrated than anthocyanins in the berries,” Howard said. “But they have equal or better anti-inflammatory capability.”

These compounds are commonly added to water to make fruit-flavored bottled water products, Howard said. In a related project, Howard collaborated with Jamie Baum, associate professor of nutrition for the experiment station and director of the Center for Human Nutrition, to conduct human trials to determine bioavailability and anti-inflammatory effects of volatiles in obese and normal weight human subjects following consumption of berry-flavored water.

Howard also collaborated with Brendon McDermott, associate professor in the Department of Health, Human Performances and Recreation at the U of A, in human trials to determine the ability of berry-flavored waters to reduce acute inflammation resulting from exercise heat stress.

“This is a small clinical trial, a pilot human study, to see if the volatiles are absorbed and whether they make a difference in inflammatory cytokine levels,” Howard said. “If they are suppressed by berry-infused water, then that’s a great thing.”

Those trials point to a pathway to better quality of life for all, and Howard is anticipating positive results from them.

Discovering the health-boosting properties of berries, developing the technologies to isolate and reclaim the beneficial bioactive compounds and infuse them into foods and drinks promises a simple and effective way to improve human health without radically changing dietary habits, Howard said.

“The potential to turn ordinary foods that are already in people’s diets into healthier foods that people want to eat every day holds remarkable promise for human health,” Howard said. “That’d be a great way to cap my career.”