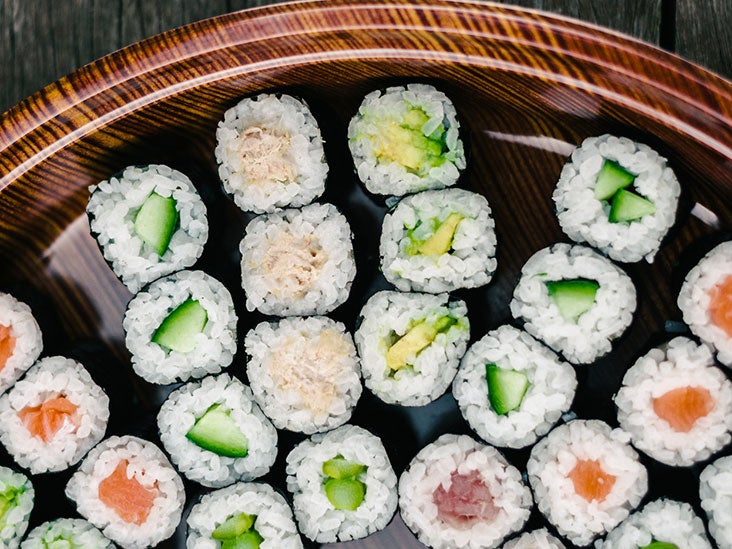 Traditionally, sushi cooked, pressed rice flavored with vinegar. It commonly includes a garnish of other ingredients, such as cooked or raw vinegared seafood, saltwater fish, vegetables, cooked meats, or egg. Sushi usually comes in bite-size pieces and may also include a seaweed wrap.

If a person makes sushi at home with raw fish, the advises that individuals choose frozen products as freezing the fish will kill parasites.

However, raw fish carries the risk of parasitic or bacterial infections, so the FDA recommends cooking the fish for safety.

This article discusses whether sushi is healthy, its nutritional content, and its potential risks. We also explain how to make sushi at home.

Sushi comes in different forms, and simple versions are generally safe to consume. Considering whether sushi is healthy entails examining all the ingredients.

Raw fish carries the risk of foodborne infections. Therefore, the advises eating cooked fish. To ensure safety, a person can substitute cooked fish for raw fish when making sushi. If they choose raw fish, frozen options will kill some — but not all — harmful germs.

Another way to make sushi healthier is to use brown rice instead of white rice. Brown rice is a whole grain that fiber and more natural nutrients. People may need to make additional preparations when using wholegrain rice for sushi, as it is not typically as sticky as refined, white rice.

Seaweed is another common ingredient in sushi. It has certain health .

Seaweeds have many bioactive compounds, including:

These compounds have a high nutritional value and offer many benefits. For example, polysaccharides from seaweeds have a favorable effect on the intestinal tract, but unlike fibers, they are calorie-free.

Additionally, pharmaceutical and food companies often use agar and carrageenan from red algae and alginates from brown algae as stabilizers in their products.

Although seaweed is rich in compounds that promote several aspects of health, some types are as they contain dangerously high iodine quantities and harmful metals, such as specific species of arsenic.

According to the Academy of Nutrition and Dietetics (AND), sushi can sometimes contain a high amount of hidden calories and salt. To avoid this, a person can consider:

The following tables list the nutrients in common sushi ingredients.

Chefs feature different types of fish in sushi recipes. Some are healthier than others, but wild salmon is a suitable choice. are the nutrients in a 3 ounce (oz), or 85 gram (g), serving of Atlantic wild, raw salmon:

The shows the nutritional values of 1 cup, or 186 g, of short-grain white rice:

are nutrients in 2 tablespoons, or 10 g, of kelp seaweed:

While most types of sushi will be safe, there are some potential risks — particularly those associated with raw fish.

Older, reports that people may develop parasitic infections from eating raw or undercooked fish. Types of parasites may include:

The notes that bacteria may also cause infections in fish.

It also advises that some people should avoid eating raw or undercooked fish and seafood, such as:

Experts recommend eating of fish per week, selecting from types that are lower in mercury. Examples of fish with lower mercury levels include:

Examples of fish with very high mercury levels include:

Below are steps for making sushi:

Sushi is a healthy option when the ingredients are simple and homemade. However, store-bought or restaurant-made sushi may include hidden ingredients.

The main drawback to its healthy potential is raw fish, as some can carry parasitic and bacterial infections. Some fish can also contain high levels of iodine, mercury, and heavy metals, whether cooked or uncooked.

Making sushi at home can reduce these risks as a person can avoid high calorie ingredients, such as cream cheese, and limit salty ingredients, such as soy sauce. Exchanging the white rice for brown rice is also beneficial, as the whole grain variety adds fiber and more nutrients.

September 30, 2022
Nutrition Labels to Move to Front of Packaging Under Biden Plan

Nutrition Labels to Move to Front of Packaging Under Biden Plan