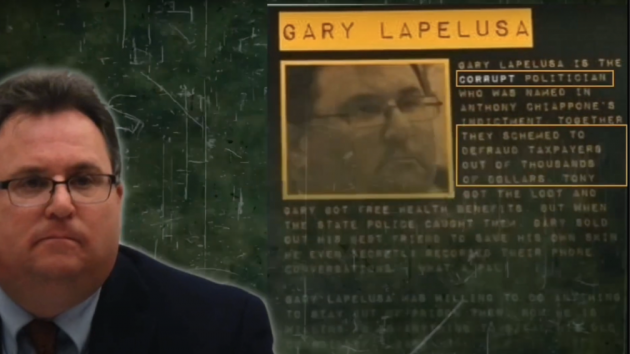 “A former councilman called Gary La Pelusa, a corrupt politician and an unindicted co-conspirator in a health benefits scheme defrauding thousands from taxpayers,” a 34-second digital ad from Franco begins.

La Pelusa was as an aide to Chiappone when he and his wife were charged by the New Jersey Attorney General’s Office for diverting legislative staff payroll checks to himself and his campaign in 2009.

In the 2014 municipal elections, then-3rd Ward Councilman Ray Greaves said in a campaign mailer that La Pelusa wore a wire to avoid being charged.

The video also touches on La Pelusa getting caught accepting health benefits, which is not permitted under state law and was asked to pay the city back roughly $23,000.

The ad concludes by chiding La Pelusa for getting jobs for he and his son at the Hudson County Parks Department in 2018 shortly after being re-elected.

“If we are going to talk about records, let’s talk about his. Greedy Gary was given the benefit of doubt and five years later he broke the public’s trust again. After being re-elected a third time, he finally secured the health benefits he sought since 2006,” Franco said in a statement.

“A fourth term might be beneficial for the La Pelusa family; but what about yours?”

Team Davis campaign spokesman Phil Swibinski said La Pelusa’s track record shows “he’s a leader with integrity,” and as he’s done for weeks, attacked Franco over a 2008 court-martial conviction for having sex with a minor.

“Councilman La Pelusa has been re-elected overwhelmingly by his 3rd Ward neighbors multiple times because they know he’s a leader with integrity and a total commitment to public service and helping his constituents,” he said.

“It’s ridiculous for someone like Nadrowski-supporter Peter Franco, with a documented criminal record that includes coercing a minor into sex, to take shots at a dedicated public servant like Gary. Sharon Nadrowski should publicly disavow this false attack from her biggest supporter, just like she should come clean about what big developers are funding her dark money attacks on Mayor Davis.”

In response, Franco said “If Gary or his spokesperson can tell me what’s false about the political advertisement, I will drop out of the race.”

In the non-partisan Bayonne municipal elections on May 10th, Franco is running independently, La Pelusa is running on Mayor Jimmy Davis’ ticket for a third time, and Council President Sharon Ashe-Nadrowski is supporting Board of Education President Maria Valado.