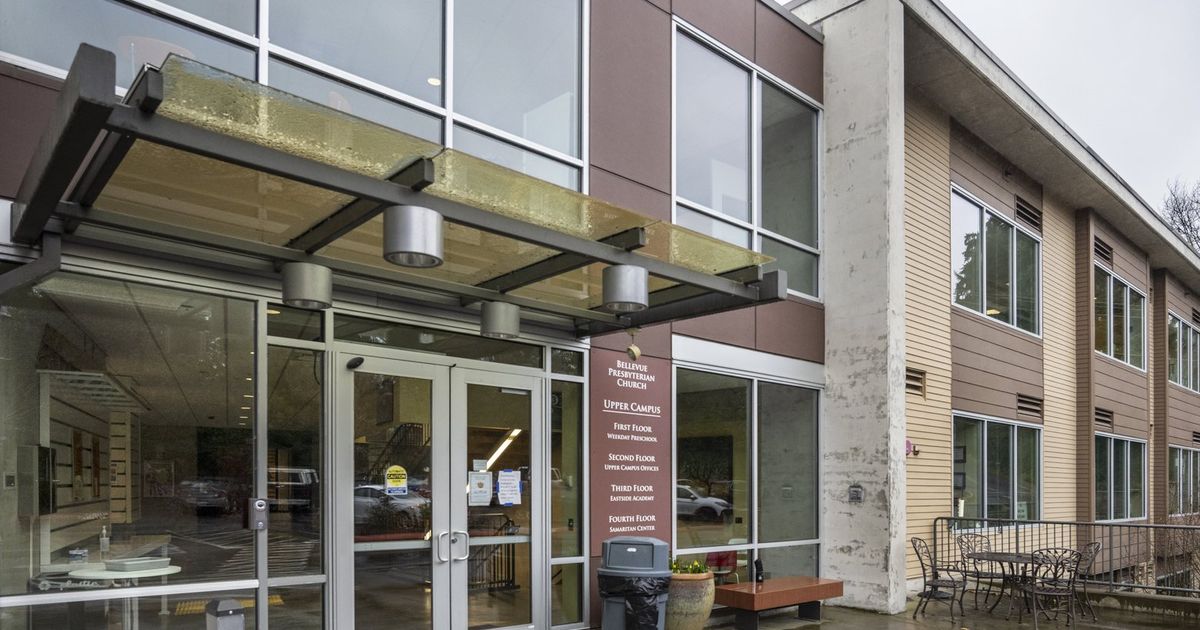 The Mental Health Project is a Seattle Times initiative focused on covering mental and behavioral health issues. It is funded by Ballmer Group, a national organization focused on economic mobility for children and families. The Seattle Times maintains editorial control over work produced by this team.

BELLEVUE — Ever get gum stuck in your hair? Peanut butter is one way to get it out, science teacher Jeffrey Britcher tells a handful of students on a recent Monday morning at Eastside Academy in Bellevue.

“Can it be anything oily or does it or does it have to be peanut butter?” a student asks.

Anything oily works, and any nonpolar solvent — meaning the electrons don’t create a positive and negative charge at the ends — can do the trick, Britcher explains.

Then, another student asks to speak with the school’s executive director, who he sees standing in the hallway. “Come by later,” she responds.

The classroom, equipped with lab tables, science equipment, and an emergency eyewash and safety shower, could fit in any traditional high school. But it’s that request for personal time with administrators that officials at Eastside Academy say makes the school stand out as an alternative option for kids with behavioral health needs.

Eastside Academy is a private, Christian-based, alternative school that serves students who have experienced challenges in larger, public school settings.

The school treats mental health as a core curriculum subject. In addition to traditional instruction, Eastside students attend peer counseling daily and receive one-on-one counseling once or twice per week from on-site trained clinicians and interns.

But while the nation and Puget Sound area face a youth mental health crisis, enrollment at the 20-year-old school, which gets most of its students from referrals by other schools or local counselors, is down. Eastside has capacity for 50 students and can house six boys and six girls nearby. Typically, about 35 to 40 students attend. This year, there are 18 currently enrolled.

Eastside is one small link in the complex chain of youth mental health care. But the school’s empty seats represent just how hard it is for the broken, muddled system to connect kids with behavioral health concerns to the care they need, despite the best of intentions.

The school’s hypothesis is that guidance counselors at traditional schools have been overwhelmed by a tsunami of need from students experiencing anxiety about returning to brick-and-mortar buildings after almost two years online, on top of other logistical demands in the job like tracking attendance and scheduling classes. This flood of requests for help makes it challenging for counselors to triage and connect students with the highest need to more intensive care — for example, by referring them to Eastside — while also tending to lower-level concerns and preventing them from escalating.

That theory is supported by several school counselors throughout the Puget Sound region.

“I fear all the time that there are going to be students who I’m not able to meet their needs, and I’m not able to even respond to them in an efficient or effective way because of the pure number of students that have high needs,” said Kaley Mitchell, a counselor at Evergreen Middle School in Everett.

“We have this expectation that schools are creating these productive, healthy citizens of the world and we’re working on it, but we’re also so underfunded and under-resourced,” she said. “We’ve been drowning because school counselors are not just responsible for career and academic development but also personal and social development.”

Many school districts have an alternative school where kids attending public school can go if they need extra support. In the Everett School District, it’s Sequoia High School, where Jaimie Burton works as a school counselor.

About 130 students attend Sequoia, compared with about 1,900 students at other high schools in the district.

Before the pandemic, Burton said she was mostly working with students who had significant trauma, like substance abuse disorders, or with kids experiencing abuse or homelessness. Now, she said she’s getting more calls from parents pleading for help, saying “I don’t even know what happened. This kid was totally happy and all of the sudden they’re so depressed they can’t go to school.” Other kids have generalized anxiety and want to come to her school because classes are small and the halls aren’t as crowded.

But as demand has increased, support has fallen. Sequoia previously had a partnership with Sea Mar Community Health Centers, an organization that provided licensed mental health therapists within the school buildings. Whereas Burton focuses on in-the-moment problem-solving to get kids with anxiety back in class or finds a spot for them to complete schoolwork, the Sea Mar therapists helped students dig deeper into the roots of their anxiety or other mental health needs. But now, due to staffing shortages, Sea Mar therapists are no longer placed inside Sequoia.

Instead, Burton works with a system called Care Solace that acts as a liaison between families and outside providers to connect to care. The challenge, Burton said, is that those providers might not match a family’s insurance, or take any insurance at all. Sometimes, the waitlists are extensive.

“When you have a student who is depressed in your office, it is hard to say ‘Here’s all the steps you need to take to maybe get a hold of someone to talk to,’” she said.

“For the last couple of years, it has felt like there’s so much to do and just not enough people, not enough time, to really provide the support our students need,” said Nicole Kemp, a counselor at Sammamish High School. “We are having to do a lot of triage.”

A voluntary survey completed by about 6,600 students between seventh and 11th grade in the Bellevue School District found 35% of students reported anxiety or depression and 20% reported thoughts of self-harm, said Jared Taylor, coordinator of behavioral health services for the district.

Students having suicidal ideation are prioritized first and can usually get support quickly. “But there are a lot of kids who are suffering, who maybe don’t have suicidal thoughts or it’s lower-level concerns, and it’s hard to get them care,” Kemp said.

Bellevue does not have an alternative school option but offers programs where students can modify their school day to fit their needs.

Kerince Bowen, director of counseling for the Bellevue School District, said “her dream” would be to hire enough school counselors to the point where the district doesn’t have to use outside agencies. “Although it’s great that they step in and fill in the gaps, it’s really hard sometimes to get services for students because they operate under a different system, and we have to accommodate.”

The Washington state Legislature approved legislation this session to allocate more than $600 million to help schools hire more counselors, nurses, social workers and psychologists. To receive the extra funding, schools must prove they’ve hired people to fill these specific positions — instead of repurposing the money for other jobs.

The new law would lower the ratio in high schools from one counselor for every 236 students currently to one per 197 by the 2024-25 school year.

Even at schools that have supports in place, the ability to get kids care often still depends on the broader mental health system functioning properly. But the system was struggling before the pandemic, and now it’s even worse.

“We had a huge drop in our workforce, and we had a huge increase in people wanting to come in for services,” said Stacy Fennell, child and family program director at Sea Mar. “I’ve been in the field for over 20 years, and I’ve been at Sea Mar for over 10, and this is the biggest mental health crisis that I’ve ever seen as far as youth goes.”

Her staff, she said, have been leaving either to handle child care or to take positions in private practice.

“We’re really hopeful that we’re going to be able to build up again and not just be in survival mode,” Fennell said. “But even in the best of times, we never had enough clinicians to go around.”

Beratta Gomillion, executive director of the Center for Human Services, said her organization has a waitlist and demand is greater than her staff can cover.

She said she’s seeing a more acute level of need from kids. “The most significant thing we’re seeing is just that their problems, the level of trauma they have, the socialization issues, have gotten pretty bad. These things have always been an issue for kids, but then with the pandemic, they really just blew up.”

In the meantime, Eastside Academy’s classrooms remain half-full. Enrollment may in part be down because of lack of awareness: Few of the counselors or community-based behavioral health center directors interviewed were familiar with the school or how it operates.

As a private school, Eastside charges $20,000 in annual tuition, though it’s conducted on a sliding scale and every student receives some amount of financial aid. Several students are on a full-ride scholarship, and no family pays more than half the cost. Staff say church service is optional, there’s no requirement for students to be part of the Christian faith, and LGBTQ+ students are accepted.

For the kids who are enrolled, staying in tune with their mental health is a key part of the day.

“Relationships are really important in our community,” said Kristen Wong, the school’s director of counseling. “Knowing that you’re not alone in your struggles. Giving them an example of what it looks like to be loved and spoken to in love, whether that’s hard truth or just affirmation. It’s so impactful, not just for them to graduate, but for them to live as people.”

Down the hall from the physical science class, in Drew Hale’s peer mentorship class, this theory is put into practice. On this day, he’s explaining how to regulate emotions.

“Meditation is about noticing the thoughts and not judging them,” he says. “Recognizing a thought that says, ‘I’m nervous,’ and allowing it to sit with me and say this is something I’m feeling and that is OK.”

“Do you guys feel like that’s an easy or difficult thing to do, to not judge thoughts?” Hale asks the class.

“If you’re imagining these thoughts going through your head, what does that judgment or self-talk usually sound like?” he asks.

“Why are you thinking this? What are you going to do about it? Why are you just sitting there and letting it happen?” the student responds.

“Yeah,” Hale says. “I usually feel like I have to push those things aside. I get in this mindset where I’m like, ‘OK, I [have got to] ignore that. I can’t let this stuff hold me down.’ But if we do that, anxiety can just continue to build and build. So we can release some of the anxiety by just allowing it to sit with us, for us to really feel it. And then let it go.”

The bell rings, ending the class.

The Mental Health Project team is listening. We’d like to know what questions you have about mental health and which stories you’d suggest we cover.

Get in touch with us at [email protected]