Health care for transgender children and teens is a “matter of life or death,” doctors say 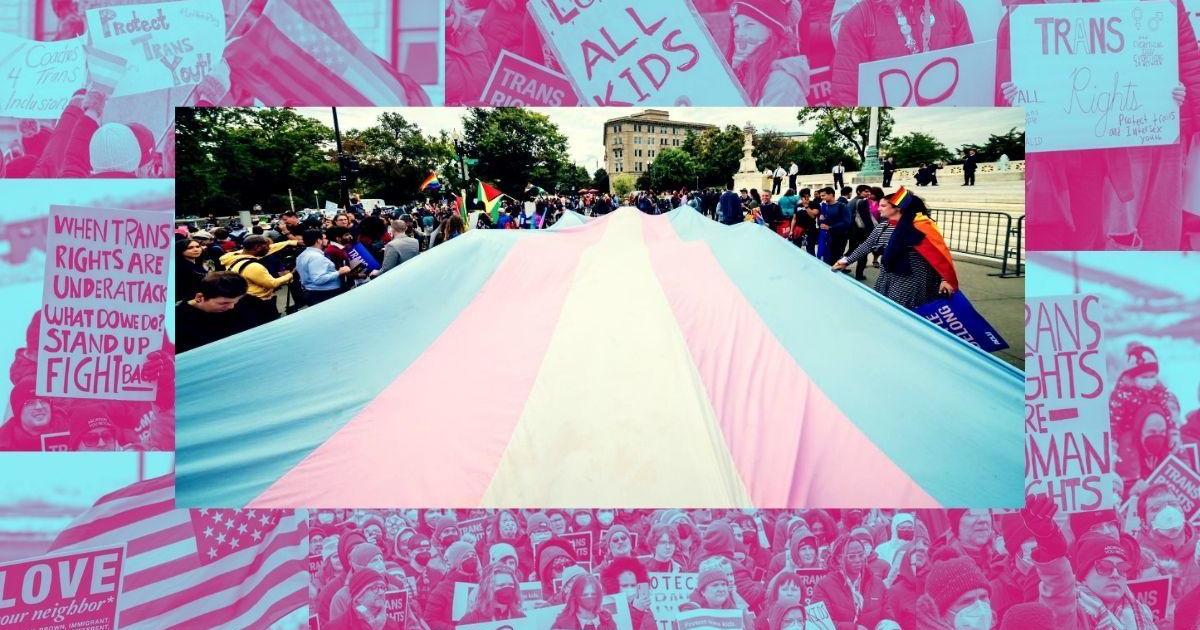 Transgender rights — and in particular, health care for transgender children and teens — has become a focus of Republican lawmakers and a new front in the national culture wars. Dozens of bills have been proposed in states around the country targeting a variety of transgender issues, from participation in sports to discussions of gender identity and sexual orientation in classrooms. But in the past two months, there has been a concentrated uptick in legislation focused on banning gender-affirming health care for youth.

In Texas, one of the most restrictive orders from Governor Greg Abbott classifies gender-affirming care as child abuse and would require licensed professionals to report children who have undergone care like puberty blockers or hormones.  While the investigation of families in Texas has been temporarily blocked by a judge, the introduction of similar bills in Republican-led legislatures like Idaho and Arizona has prompted a wave of condemnation from the medical community.

CBS News spoke with five gender health professionals about the most common misconceptions people have about transgender health care and what affirming care actually looks like.

When is the earliest a child can be diagnosed with gender dysphoria?

Children as young as age 2 or 3 begin to understand gender and differentiate between boys and girls, explains Dr. Samantha Busa (she/her), a licensed psychologist at the Hassenfeld Children’s Hospital at NYU Langone. This is consistent across cisgender and transgender children, which means that by age 5, children who will later identify as transgender or gender conforming have begun to express to parental figures discomfort surrounding their sex assigned at birth.

Gender dysphoria, a common diagnosis for transgender or gender non-conforming children, is meant to describe the distress someone experiences when their body or gender doesn’t align with their assigned sex at birth, which children are able to communicate as early as 4 years old.

“I think that there’s often this misconception, how could kids know their gender?” Busa told CBS News. “Well each of us, if you’re a cisgender person, you knew your gender when you were 2 or 3 years old, and it wasn’t questioned.”

How does a child begin to transition?

When beginning to discuss transition, the doctors that spoke to CBS News said that it is imperative to distinguish between a social and medical transition. Dr. Nadia Dowshen (she/her) said that for some children, transition can be as simple as recognition from family and friends of a new name, new pronouns or new presentation. Social transition is currently the most common treatment for gender dysphoria in children who have not gone through puberty, and is mostly focused on education and therapy.

“When a child presents to us at age 4 or 5 we do not provide any medical treatment,” Dowshen told CBS News. “At that point we make recommendations for how parents can socially support and affirm their child’s identity, which we know is beneficial. This means allowing the child to wear clothes or have hairstyles of their choosing and using names or pronouns that the child requests.”

Dr. Jason Klein (he/him), a pediatric endocrinologist and medical director of the Transgender Youth Health Program at Hassenfeld Children’s Hospital at NYU Langone, said that data overwhelmingly shows that children who are allowed to comfortably express their gender identity have better outcomes in life. Therefore, a large part of their doctors’ work is to dispel myths that parents with transgender children might come into a clinic with.

“It’s important to recognize that there is absolutely no surgical intervention that is being done for young individuals who are transgender or nonbinary. The only scissors that are being taken to children is to cut their hair,” Klein said. “Doctors play a huge role in allowing a family to air their stress in order to get to the point where they can have their intentions of being a good, supportive, wonderful family come to fruition. A lot of families just want to do what’s best for their kids.”

“We’re not just focusing on someone’s gender,” Busa said. “That’s one tiny part of their person. We want to look at the whole person and find out what are the things getting in the way.”

Psychiatric and therapeutic care continues throughout a person’s role as patient. If a child and their parents decide social transition isn’t enough, the next step would be to implement puberty blockers. Unlike what current anti-transgender legislation says, doctors do not allow children to undergo gender confirmation surgeries.

Puberty blockers allow a transgender or gender non-conforming child to delay puberty that could bring characteristics that don’t align with their gender identity until they are old enough to qualify for irreversible hormones like testosterone or estrogen.

According to Dr. Johanna Olson-Kennedy (she/her), medical director for the Center for Transyouth Health and Development at Children’s Hospital Los Angeles, puberty blockers, also known as GnRH analogs, have been used for over 50 years to treat a variety of hormone-related conditions, including prostate cancer or endometriosis in adults and precocious puberty in children (when puberty begins too young, at just 8 or 9 years old). .

Transgender children can have blockers administered through shots or an implant, which doctors say can prevent puberty from becoming a major roadblock in a child’s transition, without causing irreversible physical changes.

“Puberty blockers allow space and time for that young person to really think about how they want to present their gender from a physiologic perspective. And so that can be really important,” Olson-Kennedy said. “Puberty blockers are reversible, so that if somebody stops taking them, their body is going to pick back up where it left off and continue moving them through puberty. And then as kids get older and become adolescents and young adults, adding gender-affirming hormones and surgical interventions may become part of their transition process. But that’s not for everybody.”

Even getting reversible treatment like puberty blockers is not a quick or easy process. Each step in the process requires multiple visits with doctors and experts before children can even see a clinician with the power to prescribe them medicine. The process can be so long that gender clinics often have to instruct parents and children on how to manage frustrations if there’s a wait to see a provider or if an insurance company refuses to cover visits, therapy or medicine, according to Busa.

“Most patients tend to feel frustrated with the length of time that it takes to get the treatment that they need,” Klein said. “There tend to be a lot of hoops to jump through and things take a long time. So this kind of fallacy out there that patients are just strolling into an endocrine’s office and going onto testosterone or estrogen just does not happen.”

Can children transition without their parents permission?

Contrary to popular misconceptions, families play an important role in a child’s decision to transition, according to Dr. Tandy Aye, the director of the Pediatric and Adolescent Gender Clinic at Stanford Children’s Health.

If a child is under 18, they have the right to discuss their personal health with a doctor alone. But before any treatment can take place, a parent or guardian must be informed and give their consent. This makes parents an instrumental part of the transition process.

“The primary relationship is the bond between a parent and a child,” Aye said. “Every parent is looking out for the best for their child. And the child has respect and love from the very beginning. So it really is a personal journey for the family and having children who have the parents involved in support will actually have the best success rate as well.”

This means that treatment isn’t just for the child. A majority of gender clinics across the country consider parents an integral part of their patients’ process and work to provide them with education, tools, resources and support groups where they can speak with and learn from parents in similar situations.

Can transition be reversed? What about fertility?

Irreversible parts of transition only begin to take place when transgender adolescents decide to take gender affirming hormones, like testosterone or estrogen. While this process can begin around 16, most adolescents will not be prescribed these medicines until they are closer to 18.

Dr. Terrance Weeden (he/him), an Adolescent Medicine Fellow at the Ann & Robert H Lurie Children’s Hospital of Chicago, said that before adolescents are prescribed any non-reversible medication, they must go through the process of diagnosis and continued care with a therapist or psychiatrist who can monitor their mental state throughout the process. Patients and parents then go through several visits before they are able to give informed consent to start the medication, where they learn of potential risks of hormones.

“I encourage patients and families to have those conversations regarding the risk of fertility and whether they want to pursue egg preservation or sperm banking,” Weeden said.

So why don’t transgender children wait until they’re 18 to begin to medically transition? According to Olson-Kennedy, transgender children who experience a puberty that does not align with their gender can have extreme mental health issues and might require later surgeries that could have been prevented, effectively pricing out the poor or people of color at higher rates.

“People talk about irreversible interventions without understanding that endogenous puberty is sometimes irreversible,” Olson-Kennedy said. “So getting access to services before you develop these secondary sex characteristics that either can’t be walked back or require surgery is really lifesaving for people.”

What are the benefits of trans affirming care?

Because medical care is a specific process that is personalized by patients, there is no one-size-fits-all treatment for transgender children. But as anti-transgender health care bills continue to emerge, doctors assert that affirming health care isn’t just beneficial: it’s lifesaving.

Every major medical association in the United States has spoken out against anti-trans legislation, citing studies that found transgender children who are supported and have access to gender-affirming care experience dramatically lower rates of depression and suicide than their peers.

“When I think about some of the legislation that has been proposed across the country, what worries me is more about the parent who is living in an area where they might not be in an affirming environment. For young trans kids to hear their parents being called child abusers for protecting them, those messages get internalized,” Busa told CBS News. “So I worry about the field and the practitioners who care about those young people and their families that are really just trying to do the right thing.”

Olson-Kennedy said the transgender children and parents she works with are fully aware of legislation targeting the health care they need, a knowledge she said has caused many of her patients to carry “grief and consternation.”

“Parents are saying, ‘Could this happen here? Are we safe?'” Olson-Kennedy said.

Bills aimed at transgender health care have little to no effect on the lawmakers who pass them, according to Olson-Kennedy, but for an already small community of questioning youth, access to help and support could mean the difference between life and death.

“I see these bills posited in a way to protect children and using language to imply empathy and protection,” Klein told CBS News. “But really that’s not the case. Not allowing people to start to align with their gender identity is quite damaging. We know that trans kids have a  higher rate of depression, a higher rate of anxiety, a higher rate of self harm. Nearly half of trans individuals who are not affirmed when they are young attempt suicide.”