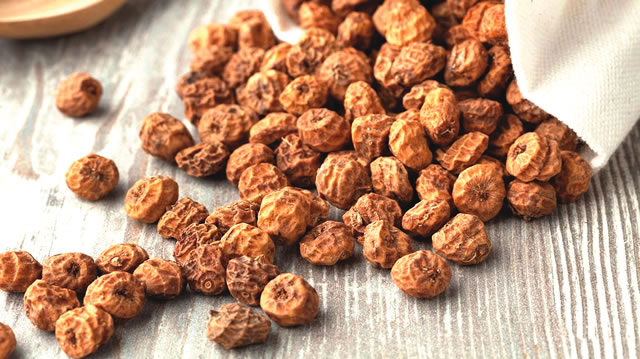 Recently, readers kept demanding seedlings of Bryophyllum pinnatum. If you have not forgotten, it is one of the plants I discussed while on the medicinal plants series. A particular reader even made an order for the plant twice and this made me get so curious about the high demand.

I asked him what he uses it for and he said, “I carried out an extensive research on this plant throughout last year and I have come to realise that God Almighty has put not just one but many miracles in it. Hospitals are full because people do not read.” It feels great that people are going back to nature but do not forget that there is danger in the abuse of plants. Moderation is the key.

Today, I will be talking about tiger nuts, which are the tubers of the Cyperus esculentus plant. It is called “ajemunmi” or “ofio” in Yoruba.

The Hausa call it “aya” while the Igbo call it “aki awusa.” Many have attested to its aphrodisiac capabilities. For this effect, it is blended with coconut and dates and the milky water is sieved and taken. In Spain, tiger nuts are called chufas and they are used as the primary ingredient in tiger nut milk, a beverage locals call horchata de chufa. The milk is used as a liver tonic in China and some other countries.

These tubers have been around for years. In fact, they were one of the first plants to be cultivated in Europe. Tiger nuts are rich in fiber, vitamin E and plant compounds that strengthen the immune system and improve digestion. This superfood has gained popularity in recent years as companies such as Califia farm (Califia Farms is located in San Joaquin Valley, California and it makes plant-based dairy products) uses it to make plant-based milk, flour and granola.

The nut is high in oil and is highly regarded in the cosmetic industry. It is used as an ingredient for natural lotions, hand bars and body soaps. Its high content in phytosterols makes it a natural antioxidant. It moisturises and nourishes the skin and therefore it is effective in epidermal treatments. In addition, it has healing and repairing effects, providing elasticity, revitalising cells and preventing ageing. It is also rich in mineral content such as sodium, calcium, potassium, magnesium, zinc and traces of copper. Tigernut milk can be made simply by soaking the tubers (you need to soak if they are dry) in water, blending and sieving the milky water. Tigernut flour is made from finely ground tigernuts. It can be made by drying and grinding the pulp leftover from making the milk or by grinding into powder dry tiger nuts or toasted dry tiger nuts. The toasting adds an extra toasty flavour profile to the flour. Toasting also dehydrates the nuts more, making it easier to grind into a fine powder. Flour made from the dry or toasted dry tiger nuts has all of its nutrients still intact since the milk has not been removed.

A nutritionist, Prof. Ene-Obong, who has done some research on tigernuts explained that they are able to control sugar levels because of their high fibre content. Jemma Claire, co-founder of UK-based wellness company Na’Vi Organics, says that tiger nuts are, “High in magnesium, phosphorus, potassium, vitamins C and E” and that they can help to reduce cellular ageing through fighting damaging free radicals, to control blood pressure and promote a healthy digestive system. Jack Sims, who launched America’s first tiger nut company, Supreme Peeled in 2013, attributes tiger nuts’ appeal to the fact that they were a vital component of our ancestors’ diets plus the fact that the tiny tubers are high in fiber.

Some of the health benefits are:

.Acts as an aphrodisiac

.Due to its high vitamin E content, it is used as a cosmetic product to help slow down the ageing of skin cells.

In a study titled, “Antihyperglycemic and hypolipidemic effect of Tigernut (Cyperus esculentus) extracts on streptozotocin-induced diabetic rats,’’by Mahmoud et al, the conclusion is that the ethanolic extracts of the tigernut tuber exhibit promising and safe antidiabetic activities in STZ induced diabetes mellitus in rats.  Hence, it may be pursued for their clinical usefulness in the management of diabetes mellitus and its associated complications.

In a study titled, “Tiger nut Processing: Its food uses and health benefits,’’ by Adejuyitan, it shows that products from tiger nuts should be encouraged to solve the problem of protein- calorie malnutrition in Africa, more so that the high price of imported milk and milk products coupled with poor milk production in Nigeria in party and Africa in general seem to have made consumers more ready to accept milk produced from plants.

In a study titled, “Effect of Tiger Nut Meal on Some Sex Hormones and Sperm Cells in Androgen-induced Benign Prostate Hyperplasia in Adult Male Wistar,’’ by Izunwanne et al, aimed at determining the effect of tiger nuts in reproductive function in rats induced with Benign Prostate Hyperplasia, the conclusion is that administration of tiger nut significantly ameliorated the abnormalities and thus restored the morphology of the sperm cells such that it can enhance fertility.

In a study titled, “Influence of Cyperus esculentus tubers (Tiger Nut) on male rat copulatory behaviour,’’ by Allouh, the study supports the hypothesis that C. esculentus tubers have aphrodisiac activity and enhances male sexual libido and performance. The observed improvements in copulatory behaviour after the administration of tiger nuts could be partially attributed to increased serum testosterone levels in male rats.

Although, research shows the flour is good for diabetics, I want to advise that If you are diabetic and you want to try the milk, incorporate it into your diet gradually and check your blood sugar so that you will be sure it does not have capabilities of increasing blood sugar.

All rights reserved. This material, and other digital content on this website, may not be reproduced, published, broadcast, rewritten or redistributed in whole or in part without prior express written permission from PUNCH.