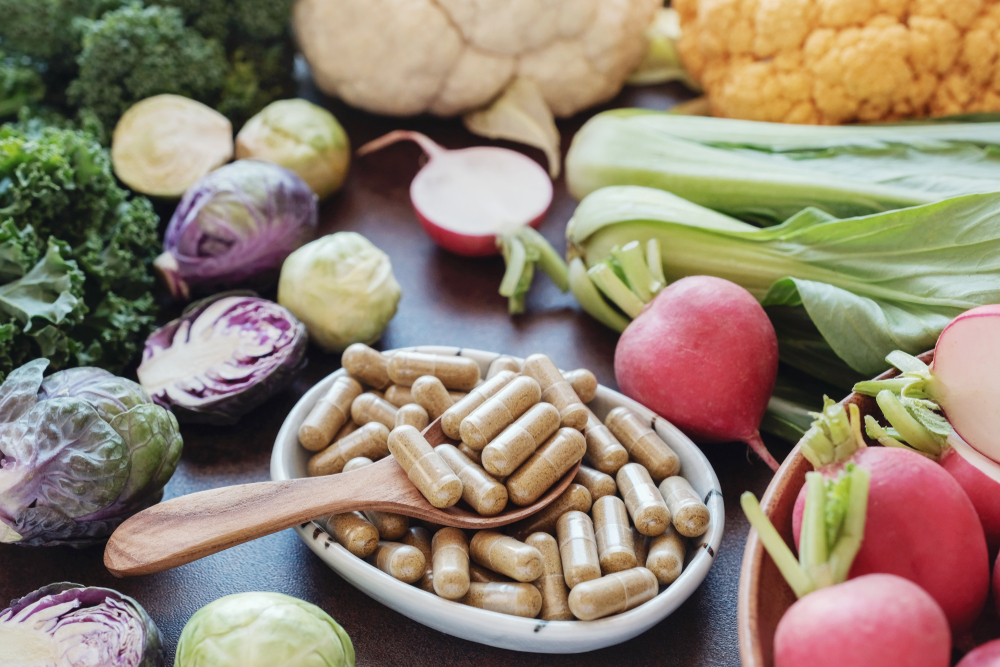 Fiber is an essential part of a healthy diet. High fiber diets have been linked to health benefits such as improved metabolism and heart health. However, as little as 5% of the U.S. population consumes the recommended level of fiber. Fiber supplementation could help fill this gap, but the health effects of purified fiber supplements haven’t been well studied.

There are two types of dietary fiber. Soluble fibers mix with water and slow digestion. They are associated with a decreased risk of heart disease, decreased cholesterol levels, and better blood sugar control. Soluble fiber can be found in some grains, seeds, legumes, and various vegetables. Insoluble fibers are found in foods such as whole grains, beans, and root vegetables. They act as bulk that can help food and waste pass through the gut more easily. The health effects of different dietary fibers, particularly soluble ones, depend partly on their interactions with the microbes that live in the gut, the gut microbiome.

An NIH-funded team at Stanford School of Medicine led by Dr. Michael Snyder explored the effects of consuming different types of fibers. They enrolled 18 participants—ten women and eight men—and gave them increasing amounts of fiber supplements for three weeks each. The supplements were arabinoxylan (AX), long-chain inulin (LCI), and a mix of five fibers. AX and LCI are popular purified soluble fiber supplements. AX is found in whole grains and other plants, while LCI is found in chicory root and vegetables such as onions and artichokes.

Each participant took each supplement for three weeks, with 6- to 8-week periods in between during which they took no fiber supplements. The researchers took a variety of measurements from blood and stool samples throughout the study. They looked at a range of health markers, including those involved in metabolism and immune function. Participants also kept food logs so that the researchers could monitor their entire diet, including fiber from other sources. Results appeared on April 27, 2022, in Cell Host & Microbe.

The team found that different types of fiber had different effects on markers of human health. For example, for most people AX was associated with reduced cholesterol and increased bile acids, which are made from cholesterol. LCI was associated with increased Bifidobacterium, a beneficial gut bacterium. Both purified forms of dietary fiber had stronger effects than the mix of fibers.

While most of the changes seen were beneficial, high doses of LCI were associated for a few people with increased inflammation and elevated levels of alanine aminotransferase, which can be a sign of liver damage. Furthermore, gut microbial diversity decreased when people were taking the purified fiber supplements.

The effects of the fiber supplements were unique to different people. Some people, for example, did not have reduced cholesterol when ingesting the AX supplement but did when consuming LCI. The results suggest that, while some general trends may be common, the optimum fiber intake for each person may vary. More work is needed to further explore these findings and the mechanisms by which different fibers affect health.

“Overall, our findings show that the benefits of fiber are dependent on fiber type, dose, and participant—a landscape of factors resulting from interactions between fiber, the gut microbiome, and host,” Snyder says. “These results have important implications in personalized response and interventions.”

Funding: NIH’s National Institute of Diabetes and Digestive and Kidney Diseases (NIDDK), National Center for Complementary and Integrative Health (NCCIH), and Office of the Director (OD).