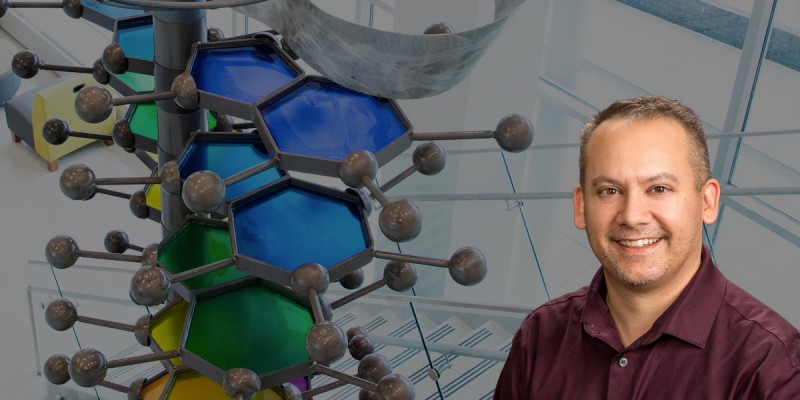 A patient care pharmacist at UHS for the past 19 years, Earle Reome earned his bachelor’s degree in pharmacy from Albany College of Pharmacy of Union College, then his PharmD from the University of Colorado Denver.

He has been a preceptor for Binghamton University School of Pharmacy and Pharmaceutical Sciences students since 2016, and was selected by students as one of three 2022 Preceptors of the Year.

“I start my days at 4 a.m. and go to bed anywhere from 8 until 11 in the evening,” he said. “It depends on the day and what I have going on. I like being busy … and I’m happiest when I have something going on.”

His schedule with UHS varies, so sometimes Reome finds himself working evenings, other times 7 a.m. to 3:30 p.m. “But I also have an outside job as an adjunct psych mental health practitioner instructor for Walden University, [based in Minneapolis],” he said. “I use Blackboard for teaching there.”

But, no matter what, education is an important part of all that he does, and that’s why he loves working with students.

“It’s important when you’re working at the top degree in your field that you give something back, not only to the patients but to the profession itself,” Reome said. “I believe it’s important that the knowledge I’ve gained is passed down to the people coming after me. It’s like paying it forward.

“I actually learn a ton from the students as well,” he added. “I receive as much as I give.”

Though he was never an academic, when Reome heard that Binghamton University was launching a pharmacy school, he actually interviewed for a position with the Department of Pharmacy Practice.

“I really had no shot, but it was important for me to see what the questions were and what the pressure was for a position like that,” he said. “I remember the day clearly because after the interview, I bought a new car!

“I just wanted to be involved and was told I would be perfect for a preceptor position,” he added. “I already had experience dealing with students even before I received my PharmD.”

Students on rotation typically will go on ICU rounds with Reome, who takes them on separate behavioral health rounds as well. “That generally that takes care of 8:30-10:30 a.m. time period, then for the most part, they will break out on their own and research patients they can work up,” he said. “They’ll do patient presentations every day and pick up a new patient every day, sometimes juggling a lot all at once.

“I try to give them a little taste of that stress they’re going to have someday if they go on to a residency or hospital so they can understand early on how to manage it,” he said.

Afternoon are spent reviewing patients and having discussions.

“It changes, too, if they say early on that something’s not working or if they’re interested in something in particular,” Reome said. “I’ll remove something or try to sprinkle something in. I try to foster that by putting them with an individual who can help them out the most or at least tailor their assignments to their interests and tailor their rotational experiences to what might suit their needs.

“Every student interaction I have is always rewarding,” Reome said. “Even if I’m dealing with a student in jeopardy in some way, it helps me work with other students in the future.

“It allows me to recognize the early warning signs of someone not really getting what they’re supposed to get and, in the future, prevent other students from making the same errors and going down the same path,” Reome added.

What he does resonates with the students he works with. One he served as preceptor for, Brian Kam, gave Reome a mug at the end of his rotation that said: Don’t speak. Hold on. Okay, I’m listening.

“That exemplifies how their rotations go. The students get very used to me talking along a train of thought, then reminding me where I was and continuing where I left off! I have the students direct me a lot,” Reome said. “They’ll remind me that ‘On Friday, you said we will do this.’ They direct me where they need me and where I can help them out as, together, we fulfill all their rotation responsibilities when I have a lot of students.”

But the impact he has on students never leaves him, and he recalled a student he was a preceptor for long before Binghamton University’s pharmacy school was established.

“It was a good 10 years ago and this student was interested in psych. On the very last day of their rotations, I usually let students off a day early for travel to their next rotation. It was time for this student to go, but she hung out an extra hour or two. She started tearing up and said ‘I love it here so much. I just don’t really want to go.’

“She went on to work nights at a hospital and got a residency after a year, then another and she’s now a psych pharmacist. Originally, she wasn’t really sure psych was what she wanted and now she has dedicated her life to it.”

Reome told of another student with no car that he would drive to and from the hospital each day who now works with HIV patients.

“During his rotation, I was able to send him to an HIV clinic one day a week,” Reome said. “After he graduated, he did two residencies, one in infectious diseases, and he told me ‘If it hadn’t been for your rotation, I wouldn’t be where I am today.’

“I really just gave him the opportunity to spend some time working with nurse practitioners who were working with HIV patients,” Reome said. “What I’m doing actually adds value to the student, and if you don’t add value in life, it’s not worth doing. I still reach out to him today and I’m actually looking back at students for help now. The students have become the teacher.

“We all have to die at some point, so I hope it’s better that, for people who were once upon a time complete strangers to me, I had some impact,” Reome said.