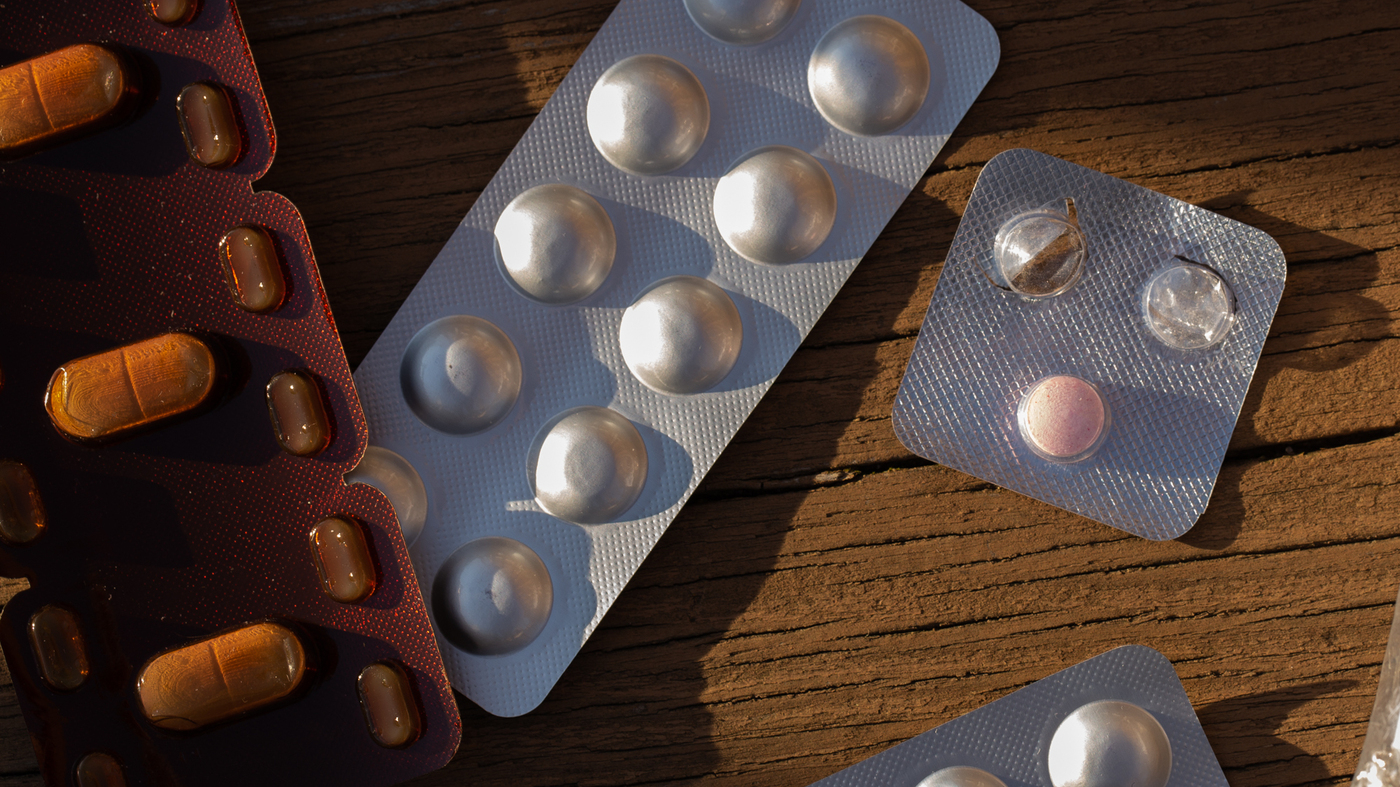 When Stephanie caught COVID-19 just before Thanksgiving of last year, her daughter Laurie suggested that she get help.

“She was really not feeling well, and I was like, ‘Just go to the doctor,'” Laurie recalls.

But Stephanie, who was 75 at the time, didn’t go. A few years before, she had been sucked into a world of online conspiracy theories — far-fetched ideas like one claiming John F. Kennedy Jr. is still alive. With the pandemic, it got worse. She became deeply distrustful of the medical system.

Laurie remembers what her mother used to tell her about the COVID vaccines: “Everybody who got vaccinated is going to die.” (NPR is only using family members’ first names to protect them from online harassment.)

COVID cases and hospitalizations are once again on the rise, thanks to a new omicron subvariant. Vaccines and certain proven treatments can help prevent the worst outcomes. But for Americans like Stephanie who don’t trust the medical establishment, there’s a network of fringe medical doctors, natural healers and internet personalities ready to push unproven cures for COVID. And a shady black market where you can buy them. Stephanie was plugged into that alternative medical network, and doctors say it ultimately cost her life.

Ivermectin has developed an enormous following over the course of the pandemic – in part because of a small cadre of fringe doctors who promote it as an alternative to COVID vaccines, despite early studies which didn’t support it as a treatment.

Ivermectin has developed an enormous following over the course of the pandemic – in part because of a small cadre of fringe doctors who promote it as an alternative to COVID vaccines, despite early studies which didn’t support it as a treatment.

The array of alternative COVID treatments is vast. Some offer kosher multivitamins, others suggest more radical interventions, such as drinking your own urine.

But one drug in particular has become the center of many alternative therapies: ivermectin. Originally used to treat parasitic worms, ivermectin has developed an enormous following over the course of the pandemic — especially in politically conservative circles. That’s, in part, because of a small cadre of licensed doctors who promote it as an alternative to vaccination against COVID. Among the most prominent is Dr. Pierre Kory, whose group, the Front Line COVID-19 Critical Care Alliance, has become a major force promoting ivermectin.

“Ivermectin is effectively a ‘miracle drug’ against COVID-19,” Kory told a Senate committee in December of 2020.

But rigorous studies show ivermectin is far from miraculous. Ivermectin was studied early in the pandemic as a potential treatment for COVID, but it hasn’t panned out. Large clinical studies show that ivermectin does not lower rates of hospitalization. Meanwhile, some of the early, promising results have been retracted, including one study led by Kory himself. Today, everyone from the American Medical Association to the Food and Drug Administration tells doctors not to prescribe ivermectin to treat COVID.

When Laurie’s mother, Stephanie, fell sick with COVID-19 last fall, she refused to get tested. Instead, Stephanie got swept up in a world of conspiracy theories online that touted alternatives to proven treatments. “I don’t believe she was supposed to die,” Laurie says. “I blame the misinformation.”

When Laurie’s mother, Stephanie, fell sick with COVID-19 last fall, she refused to get tested. Instead, Stephanie got swept up in a world of conspiracy theories online that touted alternatives to proven treatments. “I don’t believe she was supposed to die,” Laurie says. “I blame the misinformation.”

“The non-fraudulent non-messed up clinical trials are all pretty uniformly negative,” says David Gorski, a cancer surgeon and researcher at the Wayne State University School of Medicine in Michigan.

For years before COVID, Gorski tracked doctors who offered alternative cures for cancers. And he sees plenty of parallels between those physicians and doctors like Pierre Kory.

“A lot of these doctors fit the mold of what I used to call back in the day ‘the brave maverick doctor,'” he says.

Gorski says that they play up their persecution by the system, offer scant evidence for their treatments, and deride effective therapies while promoting their own cures. In Kory’s case, he offers personal consultations to sick COVID patients — for $400.

“COVID is no different than quackery going back centuries,” Gorski says.

Kory did not answer NPR’s emailed questions in time for our deadline, but he’s been everywhere on right-wing media promoting ivermectin — and his bravery for prescribing it: “People who’ve used ivermectin, their license have been threatened,” he said on a recent conservative podcast. “I have eight complaints to my medical board; I don’t know what’s going to happen to my license.”

No pharmacies, no questions

Among those influenced by Kory’s message was Stephanie. In text messages, Stephanie’s friends were passing around an ivermectin-based treatment protocol that he helped develop.

Timothy Mackey is a professor at the University of California, San Diego who studies online pharmacies. He says ivermectin promoters have spent months hyping the drug.

“They’re creating demand and this demand is being circulated in all these different online groups,” he says.

Mackey says there’s a whole range of entities trying to make a buck off the underground demand for ivermectin. It’s difficult to track how many people are seeking it out on the black market, but Mackey believes many Americans are affected.

After she fell ill with COVID, Stephanie went looking for ivermectin. A friend gave her the name of a woman in Jacksonville, Fla., who was willing to sell it to her along with some other unproven COVID drugs. Stephanie’s order totaled $390.

“She was just waiting for the pills and really did not want to do anything else,” Laurie remembers.

Her mom was getting sicker and sicker and refusing to go to the hospital. Laurie was worried that she had invested so much in the mail-order pills.

Except it wasn’t a doctor. The woman’s name was Elizabeth Starr Miller. According to her LinkedIn profile, she’s a “quantum healer” who also works as a loan officer. In text messages shared with NPR by Stephanie’s family, Miller repeatedly told Stephanie to be wary of the hospital.

Meanwhile, the drugs weren’t arriving. After a few days, Stephanie worried she might be getting conned.

Stephanie became so ill she had to be rushed to the local hospital. That same day the drugs arrived, stuffed inside a plain brown envelope with Miller’s home address on the return label.

Not licensed for use in the U.S. and possibly counterfeit

When her daughter, Laurie, looked at them, she found ivermectin pills that aren’t licensed for use in the U.S. They appeared to be made by Indian pharmaceutical companies. Except, when NPR shared the photos of the packets with Mackey, the pharmaceutical researcher, he wasn’t even sure that the Indian company had made them.

“It looks highly suspect the way this pill pack is set up to begin with,” Mackey says. Mackey points to one stamp on the pack that reads “WHO GMP Certified.” It’s a real certification in one Indian state, but he’s also seen it before, on fake pills from overseas.

“Once you see this mark here, you’re pretty much going to throw out this sample,” he says.

The pack of pills that Stephanie received in the mail included blister packs that were labeled as hydroxychloroquine and ivermectin.

The pack of pills that Stephanie received in the mail included blister packs that were labeled as hydroxychloroquine and ivermectin.

When reached by phone, Elizabeth Starr Miller, the woman who sold Stephanie the suspicious drugs, initially told NPR she had nothing to do with the drugs.

“I don’t prescribe the medicine, someone else does,” she said. When pressed about text messages she sent Stephanie that, among other things, included a tracking number for the ivermectin, Miller says she and Stephanie had consulted a licensed doctor. An NPR review of the entire text thread between Stephanie and Miller did not show any evidence of such a meeting, and her family says they are unaware of any appointment taking place. Miller says the doctor has since died of cancer and she has no notes from the consultation.

Miller says she was one of well over a hundred doctors, homeopathic healers and online pharmacists offering ivermectin. She says she believed the drugs would help and that she can’t be blamed for Stephanie’s death.

“This was a grown woman who had made her choice,” she says. “I was just trying to help her, I wasn’t trying to hurt her. I would never hurt anybody.”

Stephanie’s faith in the drugs cost her valuable time. Doctors who treated her at the hospital told NPR they believe she wasted critical days waiting for them. Stephanie grew weaker and eventually succumbed to COVID just a few days after Christmas.

Stephanie’s best chance would have been to be vaccinated before she got sick, says Jai Ballani, a physician with Northwell Health who treated Stephanie at the hospital last year. But even without vaccination, had she quickly sought scientifically tested therapies, she would have fared better. “There might have been a chance that this story might have had a different outcome,” Ballani says.

Laurie and the rest of Stephanie’s family have begun to heal in the months following her death. But Laurie remains angry that both misinformers and profiteers continue to operate, promoting their treatments to the public. “It’s so abusive,” she says. “It’s so bad.”

This story was edited by Brett Neely, Meredith Rizzo and Carmel Wroth of NPR. Design and development by Connie Hanzhang Jin of NPR.