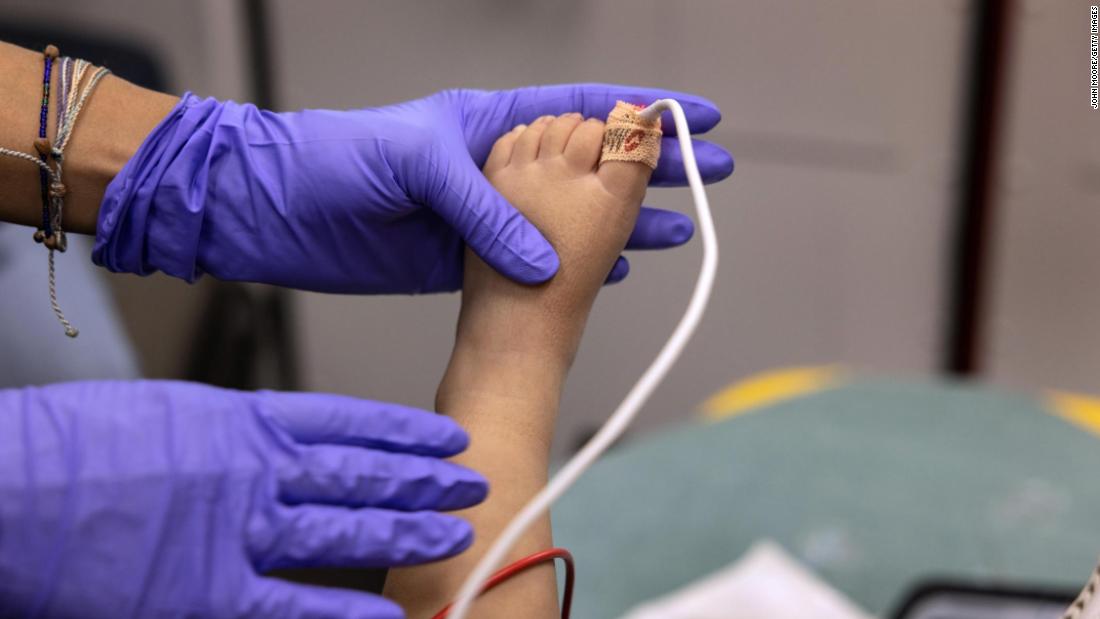 MIS-C can follow Covid-19 even some weeks after infection. It can cause parts of the body to become inflamed, and it can affect major organs including the kidneys, brain, lungs and heart.

With the Omicron variant causing so many illnesses, it wasn’t clear exactly how many MIS-C cases hospitals could expect or how serious they would be. Research is still underway, but health care providers at many major children’s hospitals describe the outcomes as “a mixed bag.”

The US Centers for Disease Control and Prevention tracks MIS-C cases but updates the numbers on its website only once a month. There have been 6,851 cases reported during the pandemic, with 59 deaths, as of January 31.
That’s a tiny fraction of child Covid cases. More than 12.3 million children have been sick with Covid since the start of the pandemic, according to the American Academy of Pediatrics’ analysis of data from the states that report cases, hospitalizations and deaths by age.
The more contagious Omicron variant brought a flood of cases: Almost 4.5 million children have had Covid just since the beginning of January.

Different regions of the country are still at different points in the Omicron wave, and it will take some time before scientists have a clearer picture of what the variant has meant for MIS-C cases overall.

Most MIS-C cases have not been fatal, but just last week, the Wisconsin Department of Health Services reported that a 10-year-old from the southeast part of the state died within the past month from MIS-C.

Tom Haupt, a respiratory disease epidemiologist with the department, said Friday that the state puts a priority on having doctors report even suspected cases of MIS-C so state officials can then report them to the CDC as quickly as possible.

“We want to share this information with the CDC with hopes that we can ultimately find out what’s causing this and what we could do to further prevent MIS-C,” Haupt said.

There are several MIS-C studies underway across the country. Scientists are still trying to figure out why some kids get it and others don’t. They’re also trying to understand the long-term consequences and the best way to treat it.

One thing is certain about MIS-C: “It always follows the same pattern,” said Dr. Roberta DeBiasi, Infectious Disease Division chief at Children’s National Hospital in Washington, DC. “It’s always two to six weeks after we see the spike from whatever variant it is, and then we’re on the lookout for MIS-C. And then, sure enough, it comes.”

DeBiasi is one of several scientists still enrolling participants in MIS-C studies. From her work with kids and Covid-19 so far, MIS-C still seems rare, relative to the number of Covid-19 cases that doctors at Children’s National have treated.
A study published Monday found that during the winter of 2020-21, there was one MIS-C hospitalization for every Covid-19 hospitalization for children 5 to 11 years old. The period studied was long before the Omicron wave hit, but the researchers note “that MIS-C may not be as rare … as previously thought.”

In Washington, DeBiasi said, her hospital has had 30 Omicron-related MIS-C cases. But each wave has brought with it fewer cases. With the first wave, DeBiasi said, they treated about 100 kids with MIS-C, and with Delta, it was about 60.

It’s unclear exactly why there have been fewer cases, but she theorizes that vaccines — now authorized for children 5 and older — may have helped.

For example, CDC research released in January showed that the Pfizer/BioNTech Covid-19 vaccine reduced the likelihood of MIS-C by 91% in children 12 to 18 years old during a period when the Delta variant was predominant.
Another study, published Tuesday, found that MIS-C happened in only 1 per million vaccinated children, a number “substantially lower” than previous estimates of 200 cases per million in unvaccinated people who caught Covid, the researchers said.

At Children’s Hospital of Colorado, workers are seeing about two or three cases of MIS-C a week, despite what Dr. Pei-Ni Jone described as “a ton” of Covid-19 cases. She said some of the MIS-C patients have been vaccinated, but the vast majority are not.

“The MIS-C children, we thought we may see an uptick with Omicron, but we haven’t. It’s very similar for us with the Delta surge,” the cardiology specialist said. “It’s really unknown what’s driving the MIS-C cases.”

At the University of Pittsburgh Medical Center, Dr. Marian Michaels watched the many-fold increase in Covid infections and hospitalizations in her area with deep concern, but the spike in MIS-C cases hasn’t come. “Luckily, in our area we are not seeing a surge,” she said. “I’m very grateful.”

Michaels said she regularly talks with other doctors as a part of a CDC surveillance network, and with Omicron, it’s been “a mixed bag.” Some hospitals have seen a spike in MIS-C cases, but many have seen only a handful.

At Children’s Hospital in Los Angeles, they too are watching patient numbers closely, but so far, so good.

In December and January, the hospital treated 22 MIS-C patients. In February, it’s been three, with two hospitalized.

“Because we know MIS-C may begin weeks after a child is infected with SARS-CoV-2, we are continuing to be vigilant and waiting to see what the next few weeks bring,” Szmuszkovicz said.

At Lurie Children’s Hospital of Chicago, Dr. Ami Patel, a pediatric infectious disease physician, said workers have seen a steady uptick in MIS-C cases since the end of December. But this is “still relatively lower numbers overall compared to the winter 2020 surge,” she said. During the Delta surge, the hospital saw “relatively few” MIS-C cases.

But there has been a spike at Seattle Children’s. “Approximately 15% of the total MIS-C cases we’ve seen since March 2020 have occurred since mid-December 2021, when Omicron emerged as the main variant. These numbers suggest that MIS-C is increasing with Omicron,” Dr. Michael Portman, director of research in the Division of Cardiology, wrote in an email to CNN.

Texas Children’s in Houston saw the peak in Omicron cases January 7, a little later than in other regions, so workers there still don’t know what MIS-C case load to expect.

There haven’t been any “dramatic increases” — at least, not yet, according to Dr. Jim Versalovic, pathologist-in-chief at the hospital.

Health care providers there have treated more than 280 MIS-C cases since the pandemic began, with two-thirds serious enough that they’ve needed critical care.

The biggest number of MIS-C cases happened between mid-September and mid-October, with the Delta variant. “We’re not quite at that level yet,” Versalovic said. Instead, they’re seeing about one case per day every two to three days.

At UH Rainbow Babies and Children’s Hospital in Cleveland, MIS-C cases seemed to follow much quicker after the spike in Omicron infections than with previous Covid-19 waves. That may not have been unique to the Omicron variant, though, said Dr. Claudia Hoyen, a pediatric infectious disease specialist there.

“I think the reason that it seems so bad was that we were in the Delta surge when Omicron came,” she said.

At Cincinnati Children’s Hospital Medical Center, Dr. Patty Manning said, workers have seen two or three cases of MIS-C a week during Omicron — “possibly less than what we would expect, given the spike of Covid cases in general that we saw.”

She said that could be due to the success of vaccinations, or it could be something specific about Omicron causing fewer MIS-C cases. “It’s unclear at this moment. But we’re never wanting to get comfortable,” Manning said. “Parents still need to be vigilant.”

What to watch for with MIS-C

Pediatricians say that if kids have Covid-19, parents should watch for MIS-C symptoms, typically four to six weeks after the infection. They may look like a return of Covid symptoms or totally different. If the symptoms get worse, they need treatment.

“Children have died in the United States because they didn’t get to emergency rooms fast enough,” Versalovic said.

Doctors said they have learned a lot about how to treat MIS-C. At Jone’s hospital in Colorado, many of the children with MIS-C have not needed to be hospitalized for quite as long as kids were at the beginning of the pandemic.

Doctors are much better at recognizing MIS-C, said UPMC’s Michaels. “Treatment right up front has just been critical.”

That treatment usually includes care that focuses on relieving symptoms and preventing complications, including IV fluids and antibiotics to reduce fever, to keep blood pressure up and to get rid of any possible bacterial infections.
Because MIS-C can throw a child’s immune system into hyperdrive, doctors may also give the child medicine that would suppress their immune system. Those drugs could include steroids or intravenous immunoglobulin, a treatment for people who have antibody deficiencies.

Some children may also need breathing or cardiac support like ventilation or ECMO treatments.

“The long-term follow-up will also be essential to understand how kids do long-term and to understand, from an immune system perspective, what’s going on,” said Michaels, who is involved in several MIS-C studies. “It will also be important to understand from an immune system standpoint, the ones that still are having an effect long-term. Why is that in that case versus another child who was perfectly healthy before the virus? Why would they not have such a good outcome?”

Most children seem to recover well

Jone said that at Colorado Children’s, most children get better and do not seem to have lingering effects.

“The first MIS-C children we saw were in May of 2020. So they already had their one follow-up, and all of those kids in 2020 have done very, very well,” Jone said.

A study in American Heart Association’s journal in January suggested most children with MIS-C begin recovering in the first week after hospital discharge and fully recover heart function within three months.

The best approach with MIS-C, doctors said, is for children not to catch Covid-19 in the first place.

“It’s a very scary, serious condition,” Manning said. “We want to avoid and prevent it at all costs.”

That means getting all kids vaccinated if they’re eligible. Children are still the least-vaccinated of any eligible age group.

There’s no vaccine authorized for children under 5, but parents can protect them by making sure every adult around them is fully vaccinated.

“We do need to vaccinate. There is no infection in the world that has ever gone away just because of having herd immunity from natural disease. Measles didn’t go away from herd immunity,” Michaels said. “Protecting yourself and your loved ones by being immunized is really critical.”