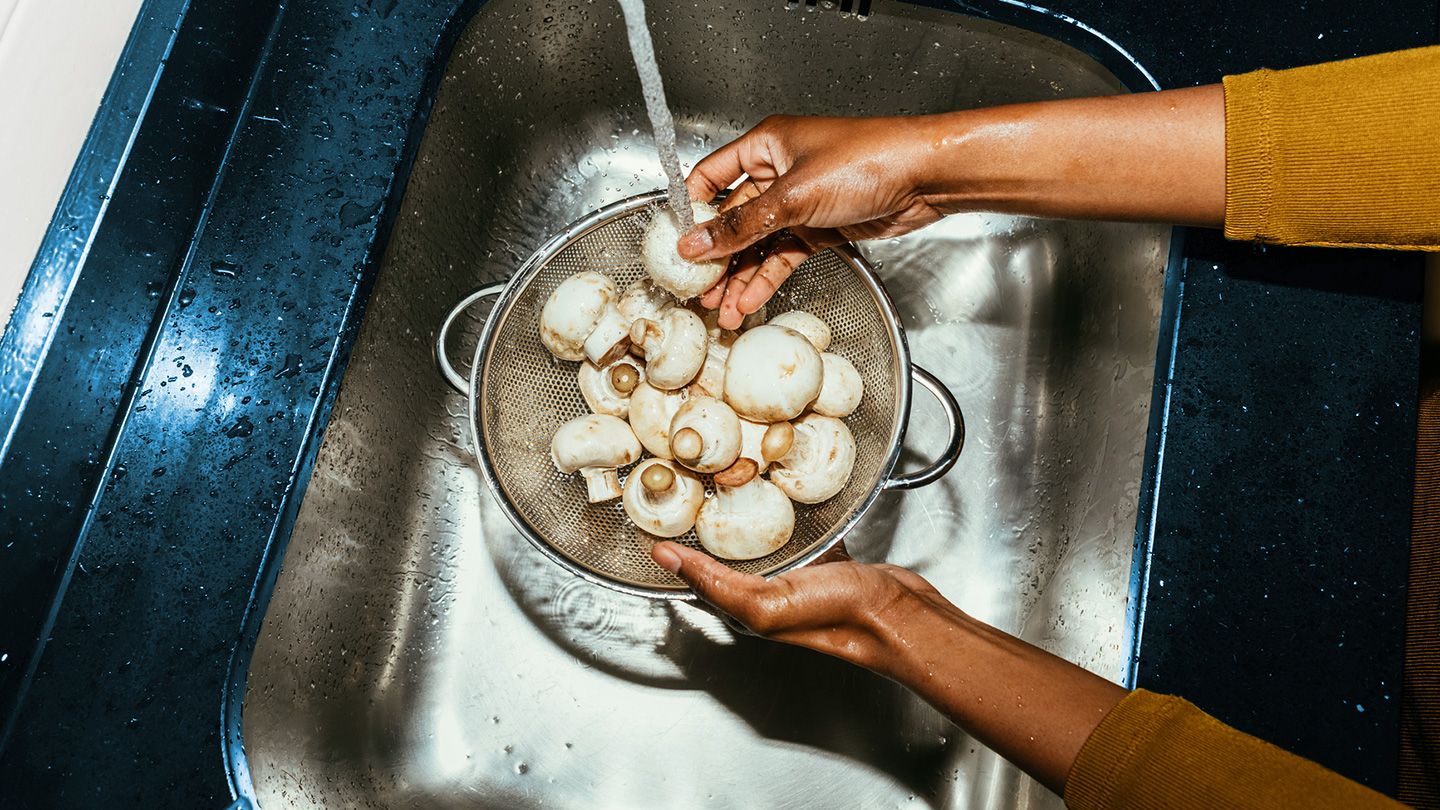 Even if you’re eating them raw in a salad, fungi are on fire right now. In 2019, sales of mushrooms and mushroom-based products grew 33 percent compared with the previous year, the industry magazine Nutritional Outlook reported in 2021.

Nutrition experts are excited about fungi. “Mushrooms are low in calories. They also provide a wealth of macro and micronutrients, particularly B vitamins, selenium, zinc, and copper,” says Katherine Brooking, RD, a registered dietitian in New York City and a co-creator of the Appetite for Health syndicated weekly news series. B vitamins are important in the manufacture of energy in cells, she explains. And selenium is a powerful antioxidant, according to the National Institutes of Health (NIH) Office of Dietary Supplements, while zinc and copper are essential for a strong immune system.

It’s clear that whole mushrooms that you eat raw or cook for use in recipes are beneficial for your health, and these, rather than mushrooms in processed forms, are what we’re focusing on in this story. Other forms — supplements, nutraceuticals, and mouth sprays, for instance — may provide other benefits, but additional research is needed.

The most popular mushroom produced in the United States is the white button mushroom, says Kim Bedwell of the Mushroom Council. “Other varieties, such as cremini — also known as baby bella — and portobellos are becoming increasingly popular,” she says. You’re also more likely to find specialty mushrooms (such as shiitakes, oysters, and maitakes) at mainstream grocery stores, she says. You have a lot of choices, depending on your taste preferences — and that means a lot of ways to enjoy the following seven health benefits of mushrooms.

When exposed to UV radiation, mushrooms generate vitamin D, according to a review publication in the October 2018 Nutrients. (A half cup of UV-exposed white raw mushrooms contains 46 percent of your daily value for D, notes the NIH.) And that’s an amazing nutritional perk for a veggie (er, fungi). “There really aren’t that many food sources — especially plant sources — of vitamin D,” says Brooking. “The vitamin plays an incredibly crucial role in immune and bone health.” As the Nutrients review of research points out, the recommended amount of vitamin D supports muscle function, reduces the risk of falls, and may have anticancer, antidiabetes, and heart-protective properties.

Your own body manufactures D from exposure to the sun, but several factors can affect your risk of a deficiency in this vitamin. You may be deficient if you’re not getting enough sunlight, are not eating enough in your diet, or have certain medical conditions that affect absorption, such as Crohn’s disease, osteoporosis, or chronic kidney or liver disease, per the MedlinePlus.

When shopping for mushrooms high in vitamin D, look on the front or bottom of the package for this information, says Bedwell. Another way to tell if your mushrooms are high in vitamin D is if they cover at least 20 percent of the daily value, or DV, per serving. You can find this info on the Nutrition Facts label. Make sure that you also pay attention to the “best by” date and eat the mushrooms before that time, as that will ensure you’re still getting a good amount of vitamin D, the Nutrients study notes.

Your gut contains trillions of bacteria, and consuming mushrooms may help populate your GI tract with the right balance of bacteria to keep your GI tract healthy and strengthen your immune system, notes a review in the September 2017 International Journal of Molecular Sciences. “The research on mushrooms and gut health is early but really compelling. Mushrooms contain prebiotics, which are the nutrients that probiotics feed off,” says Brooking. Therefore, prebiotics from mushrooms may assist in the growth of this beneficial bacteria. Probiotics are live microorganisms, or bacteria, that may have health benefits for the body, as they aid in digestion and produce nutrients, according to the National Center for Complementary and Integrative Health.

3. Mushrooms Are Good for Your Blood Pressure

One whole portobello mushroom — those popular large mushrooms — provides 306 milligrams (mg) of the important mineral potassium, per the USDA. Potassium helps control blood pressure by counteracting the effects of sodium and by improving blood vessel function, according to the American Heart Association. How? More potassium in your diet encourages the excretion of sodium in your urine. The heart-health benefits don’t stop there. Mushrooms may also help improve cholesterol and triglyceride levels and reduce inflammation, according to a review in the May 2021 American Journal of Medicine.

4. Mushrooms Have Been Linked With Cancer Prevention

Consider adding fungi to your cancer-prevention diet. People who had higher routine mushroom intake had a 34 percent lower risk of any cancer than those who ate the least, especially in the case of breast cancer, in a meta-analysis of 17 studies in Advances in Nutrition published September 2021. Mushrooms are high in antioxidants, particularly ergothioneine and glutathione, which may protect cells from damage.

That said, not all research has found positive associations. In a prospective cohort study involving more than 100,000 men and women, researchers concluded that participants who ate five servings of mushrooms per week did not have a lower risk of 16 different cancers than those who rarely ate mushrooms, per Cancer Prevention Research in August 2019.

5. Mushrooms May Promote Longevity When Substituted for Red Meat

Mushrooms add an umami, or savory, meaty flavor, to foods. “They’re the perfect extender to add in place of or in addition to meat in so many recipes,” says Brooking. As part of a large prospective cohort study published in April 2021 in Nutrition Journal, researchers found that study participants who consumed one serving of mushrooms per day versus those who consumed one serving of processed or red meat had a 35 percent lower risk of death from any cause.

The possible reason is that in addition to containing those antioxidants ergothioneine and glutathione, mushrooms are also low in calories, sodium, and fat, and high in fiber, the study authors report. At the same time, people who consume mushrooms tend to eat healthier diets, so it’s unclear whether mushroom consumption alone was responsible for the participants’ longer life spans.

We all want to stay sharp as we age, but 12 to 18 percent of people age 60 or older have mild cognitive impairment (MCI), a condition that’s sometimes a precursor to Alzheimer’s and impacts memory, thinking skills, and judgment, according to the Alzheimer’s Association. A healthy diet is important for an aging brain, and mushrooms can be a part of that. In a study on 663 adults ages 60 and older in Singapore, those who reported consuming more than two servings of mushrooms per week had 57 percent lower odds of developing MCI than those who ate them less often than once a week, according to a March 2019 study in the Journal of Alzheimer’s Disease. (The study used golden, oyster, shiitake, white button, dried, and canned mushrooms.)

One possible reason for their cognitive-protecting properties? Ergothioneine, which is not only an antioxidant but has anti-inflammatory properties, too, both of which may protect against the neuronal damage.

There’s a lot of talk about using psilocybin, a hallucinogenic compound found in “magic mushrooms,” as a psychedelic treatment for conditions like depression and PTSD. And, when done under careful supervision, these therapies have some promise: In a small (59 person) study published in the New England Journal of Medicine in April 2021, six-week treatment with psilocybin was found to be just as effective as escitalopram, a standard antidepressant, in relieving depression. (In addition to being a small trial, there was also no placebo, which limits the strength of the results.)

Currently, large research facilities, such as the Center for the Neuroscience of Psychedelics at Massachusetts General Hospital, are researching psilocybin as a therapy for treatment-resistant depression, as psychedelics may be useful in facilitating new neural connections. That said, this type of treatment is in the future. While psilocybin may be used in certain specific research settings, it’s currently a Schedule 1 substance (meaning it’s illegal for personal use at this time in the United States) and is not approved for medical use, according to the Drug Enforcement Administration.